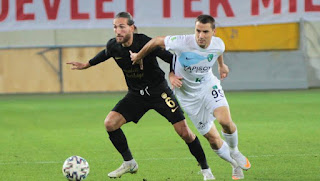 Ankaragucu were yet again kicked out of the Turkish Cup last night to lower league opposition with an embarrassing 2-1 defeat at home against Kocaelispor. Myself and Jim last night agreed the match report would be a one word protest, but i have too much to say about this team and the performance.

Fuat Capa handed starts to Academy products Furkan Beklevic and Berke Gurbuz and their was a return to the team for Alper Potuk.

Ankaragucu started the match very well but it was the same story as every other match this season. As soon as the players got into the box, they couldn't finish their chances, and the final ball was woeful.

After only 3 minutes, Saba beat two men, before rounding the goalkeeper and had an empty net from a tight angle, but somehow it the bar as he miss hit his shot. That was a sign of what was to come for the rest of the game.

On the 11th minute Kocaelispor gifted a chance to Saba but his control let him down and he couldn't even get a shot on goal. A couple of minutes later Alper had a good chance but fired his shot high and wide from just inside the box. A minute later and a great bit of play from Borven and Alper but Captain Alper saw his shot hit the post. Ankaragucu were dominating at this stage.

On the 25th minute Saba had another chance after some nice footwork, but his shot was straight at Ismet and another wasted opportunity.

Ten minutes later, Atilla Turan crossed for Borven but he headed wide and into the side netting when he should have scored. Just before half time Saba had a free kick easily saved by Ismet.

After dominating the first have and having 6-7 good opportunities to take the lead, the inevitable happened, as Kocaelispor took the lead 5 minutes into the second half. Poor defending from Atilla and Atakan allowed Mervan to capitilise and put the visitors 1-0 up.

Irfan had a free kick hit the side netting 5 minutes later as Kocaelispor looked to extend their lead. This was a Kocaelispor team who had Aydin Karabulut in their starting line up and missing some first team players.

On the 70th minute, Luka Adzic showed great skill beating his man before blasting over from about 8 yards out. Similar to Saba, when it comes to finishing or crossing, Adzic lets himself down.

Ankaragucu did grab their equaliser on the 75th minute when Bolingi got onto his own rebound which came back off the post after a great cross from Alper. 1-1 and Ankaragucu were back in the game and pushing for the winner.

Kose went close from a Free Kick for Kocaelispor but for a good save from Furkan, and at the other end Adzic had a good chance in the last minute but shot straight at the keeper.

Then came the winning goal, Ankaragucu on the attack, Erdi makes a mistake, Aydin Karabulut carries the ball and the ball finally finds its way to Kose but Furkan makes a good save. Kocaelispor react quickest and Erdinc puts the ball into the back of the net.

An awful night for Ankaragucu and Fuat Capa as the team are now winless in the Turkish Super Lig and out of the Turkish Cup against a 3rd tier side.

Its the same problems every week, wasting multiple opportunities and no end product in the final 3rd. In the first 6 games of the season in League and Cup, Ankaragucu attacking players have 1 assist between them and that came last night from Alper. Of the wingers Saba and Adzic have 0 goals or assists, and Paintsil is the only one to have contributed.

You look at the bench last night. We had 1 Centre midfielder on the pitch in the second half, and Daniel Lukasik was still sitting on the bench. This is a player we had last season and decided to renew his contract again. Mucahit was signed in the summer and again didnt get on the pitch.

Their needs to be an inquest into the signing policy at Ankaragucu, too many signings are failures. Some of these players still have time to turn things around, but time is running out.

And next we look at the attitude. The team has lost its last 2 games, and players such as Saba, Bolingi, Sarlija are sharing pictures of themselves on Instagram in those games. Bolingi even shared the result. These guys are losers and disrespecting their fans with this selfish attitude.

Next up is Fatih Karagumruk on Sunday, if we dont take 3 points, say hello to relegation as early as November.