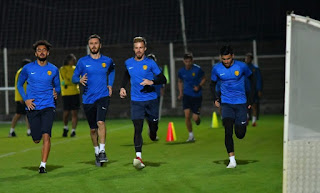 Sundays match with Goztepe is a must win for Ankaragucu and no other result will be acceptable. Fuat Capa has a full team available for selection now that everyone has recovered from Covid, while Goztepe will be missing 3-4 players. Ankaragucu have enjoyed a successful training camp in Antalya and Fuat expressed his delight at having everyone available for selection.

The performances under Capa have been unacceptable as have the results, but to be fair he hasnt had the opportunity to play a full strength team this season. With the team rooted to the bottom of the table with only 2 points, time is running out to turn things around before they are too far behind the rest of the relegation candidates.

Despite a disappointing 2-2 draw against Fatih Karagumruk, there were some positives to take from that match. The team didnt play well but still managed to take a point against a good Karagumruk side. Emre Gural again showed he can be a valuable player in the squad as he scored the equalising goal and his overall play was impressive. Daniel Lukasik came on and made a difference too and will be hoping to find a place back in the starting line up after a poor start to the season.

Question marks still hang over the likes of Jonathan Bolingi, Torgen Borven, Saba Lobjanidze and Luka Adzic who have all failed to deliver this season. Zero assists between the four players, with both Saba and Adzic failing to hit the net. Adzic does have the talent and if he can get on the scoresheet or grab an assist it might give him the confidence to go on and kickstart his Ankaragucu career.

Torgen Borven came with a good reputation from his time in Norway and its clear that he needs the attacking players to create 4-5 chances per game for him to be effective. If those chances arent being made he is very ineffective. Saba and Bolingi we have already said to much about those two.

Alper Potuk is key to how Ankaragucu play, he needs 2-3 workers behind him who will break up play and allow him to go and create. The one negative is his fitness, thats why we cant him playing in a central midfield role. He needs to be playing in one of those wide/number 10 positions where he can come inside close to the striker and allow Pinto to come forward.

Goztepe like every other Super Lig team will be tough opposition, but also a team where Ankaragucu can go and take all 3 points. Dever Orgill and Gerson Rodrigues scored the goals the last time the two sides met last season which finished 2-2.

They have taken 8 points from their first 7 games winning 1, losing 1 and drawing the rest. They have some talented players including Halil Akbunar, Guillherme and new signing Cherif Ndiaye but have lost key players from last season Beto and Serdar Gurler. They will also be without new signing Brown Ideye.

The key to winning this game is the midfield. Ankaragucu need to be solid in the middle of the park and keep their shape which should allow the attacking players to go and create including Pinto and Kitsiou. A strong midfield will also protect the centre halfs when Pinto and Kitsiou go forward. Far too many times we have seen Erdi and Pazdan exposed on the counter attack.

Lets hope we have something to celebrate on Sunday!