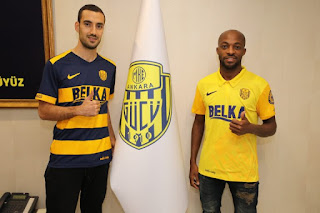 Ankaragucu have this afternoon completed the double signings of Alperen Babacan and Geraldo both who have signed 1.5 year deals on free transfers from their respective clubs.

Geraldo is an Angolan winger who has signed from Al Ahly in Egpyt where he only managed 3 games this season and will likely take a while to get his fitness levels up. He has previously played in the Angolan and Brazilian leagues but a lot of question marks over this signing as his goals and assist record for a forward player aren't impressive.

Alperen is a center back who was released by Akhisar where he has spent most of his career between them and Denizlispor. He can also play at right back but again, another player who doesnt fit the profile of player Ankaragucu should be signing.

Lets hope both signings work out for the sake of the club, but they have a lot of work to do and will need to hit the ground running.