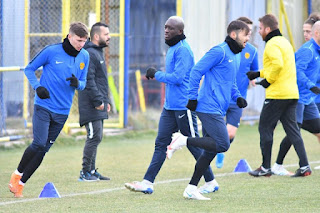 Every match is a big game for Ankaragucu when you are consistently fighting against relegation. But Sundays match is the biggest game of the season so far, one that has given our fellow Kanka, Jim sleepless nights as he confessed. That and another defeat by his beloved Hibs to the mighty Rangers.

The first half of the Turkish Super Lig is over and Ankaragucu are 1 point from Safety and 5 points away from Konyaspor. When you look at where they were back in November, they have done well to bring themselves within touching distance of the other relegation candidates.

One of those relegation candidates are Erzurumspor who Ankaragucu met on the first game of the season and after taking the lead, lost 2-1. Its something that Ankaragucu have struggled with on a few occasions this season, such as the Rizespor match and Alanyaspor where they have a comfortable lead and end up taking 0 points from any of those games.

A lot has changed since both sides met the last time and there will be new managers in the dugout for each team. Former Ankaragucu manager Mesut Bakkal is in charge at Erzurumspor, while Mustafa Dalci is manager of Ankaragucu.

Erzurumspor looked down and out until the last month similar to Ankaragucu. They have had some good results including 1-1 draws with Gaziantep and Alanyaspor, a 2-1 win at Kasimpasa and a 3-1 win over Yeni Malatyaspor.

They have some good players in their squad too including Arvydas Novikovas and Ricardo Gomes who have impressed a few times when i have watched them this season. They also have Atif Chahechouhue and Mitchell Donald who are experienced Super Lig players. Former Ankaragucu player Mostefa El Kabir and Manuel Da Costa are also part of the squad but El Kabir will likely miss out due to fitness.

Ankaragucu blew a great chance of taking all 3 points at Alanyaspor on Monday night after going 2-0 up but lost 4-3 after some terrible defending and poor tactical decisions from Mustafa Dalci. Ankaragucu started the game very brightly with Saba and Paintsil both working very well for the first two goals.

The Alanyaspor trio in midfield however, Salih, Bakesetas and Efercan were dominating the game and it was clear Ankaragucu needed another midfielder on the park, and also some help for Ali Kaan who was having a torrid time against Davidson. Mustafa Dalci stood at the side watching on as Alanyaspor turned the game around and then into the second half decided to bring on Michal Pazdan a center back who hadn't played in a month, into midfield.

Mustafa Dalci has done a good job overall considering where Ankaraguc have been. But its clear his strengths are his man management skills and he lacks in the tactical department. The team need all 3 points at the weekend if they are going to stay in this league and it will be interesting to see how Dalci lines up.

The good news is that Michal Pazdan and Stelios Kitsiou should be available to come back into the team. Both have been a huge miss for the club. Aliou Badji scored his first goal for the club and again will be looking for the likes of Saba, Paintsil and Endri to create chances for him.

Saba and Paintsil both combined very well in attack against Alanya and it was good to see Saba in particular improve on his final ball. He is the best player in the Super Lig when it comes to dribbling, but he needs to work in his final ball to get to the next level and maintain that consistency.

A huge game on Sunday for both clubs, we need to be solid at the back while taking our chances in attack. We take a look below at the team we think can take all 3 points.

GK -Mert Topuz - Its likely Freidrich or Korcan will play in Goal but neither have impressed this season, and it could be time to play highly rated Mert who deserves his chance in the team.

RB - Stelios Kitsiou - A welcome addition back to the team, he has been badly missed since his injury.

CB - Michal Pazdan - Same as Kitsiou, and brings that experience to the defence which has been lacking.

CB - Zvonimir Sarlija - Has had an inconsistent season, but looks more solid at CB than he does at RB.

LB - Thiago Pinto - Important to get him back playing consistently at Left back.

CM - Ibrahim Akdag - Has come in and looked a good signing but needs to watch his discipline.

CM - Daniel Lukasik - The most important player in the middle of the park with his work rate and experience.

CAM - Endri Cekitci - Not his ideal position but since the club still hasnt signed anyone for the Number 10 Endri is the best option.

RW - Paintsil - Two great finishes last game and will be looking to get on the scoresheet again. Now starting to show more consistency.

LW - Saba -  Another good performance against Alanya and will be looking to build on that at the weekend.

CF - Aliou Badji - Will score goals if the service is there. Needs to be better with his hold up play.