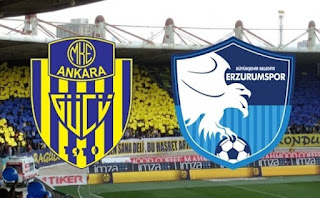 Ankaragucu face their biggest test of the season so far as they host 3rd placed Erzurumspor on Sunday night at Eryaman Stadium. The visitors come to Ankara in impressive form with 5 wins and 1 sole defeat at leaders Umraniyespor in the last 6 games.

Early team news and Ankargucu were given a boost during the week as both Kwabena Owusu and Hurriyet Gucer returned to the team. Owusu in particular will be a welcome addition back into the team. Murat has made that position in the wide right his own and Eren as the centre forward. Adding Owusu into the mix will give the team an excellent front 3 pairing.

Like Ankaragucu, Erzurumspor are another of the well supported clubs in Lig 1 with big expectations from their fans to get back into the Super Lig. The start man in their side is Arvydas Novikovas who is a winger that can score goals from all areas of the pitch including set pieces. I have always been impressed with him when watching Erzurum and he should be playing at a higher level.

It looks like they will be without Aaron Olanare their main striker through injury and should go with either a 4-1-4-1 or 4-3-2-1 formation. Erzurum have been pretty solid defensively of late and it will be a big test for the Ankargucu front men.

Ankargucu put in one of their best away performances in a number of years last week at Bursa and Mustafa Dalci will be hoping for a repeat of that level of performance on Sunday night. Eren Derdiyok has proven with the right service he will score goals and the addition of Ghayas Zahid to the team provides more creativity.

Abdullah Durak as we mentioned last week put in his best performance of the season and has shown when fit he can be a big player for the club. He is the defensive midfielder who protects the defence and breaks up play, but is also good on the ball. Ishak Cakmak adds to that balance as we are now seeing he has an attacking side of his game as well as all the work he does off the ball.

Hopefully we see a bigger crowd in the stadium for this game. The crowds have been disappointing of late due to Covid rules and protests. But if you can go to the stadium and have your vaccinations then protest in another way as the team needs the fans behind them.