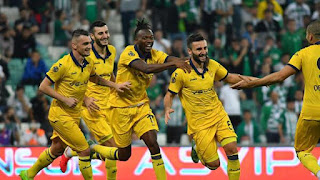 Ankaragucu delivered one of the best team performances we have seen from the club in a number of years with a resounding 4-0 win in Bursa. Eren Derdiyok was the start of the show with an excellent hat trick as he continues to prove his doubters wrong.

When the teams were announced, i have to admit to being disappointed to seeing Ali Kaan dropped from the team while Abdullah kept his place. However Dalci got it right as Abdullah delivered his best performance to date and the team balance was a lot better than the match against Menemen.

Bursa had the first chance of the match on the 11th minute when they were through on goal after a mistake from Sinan, but Akin made himself big with an excellent save. Five minutes later Abdullah won the ball in the middle of the park before putting Eren through on goal, but the big striker didnt have the pace and the Bursa defender got back to clear.

Only a few minutes later, Eren would get himself on the scoresheet. An excellent move involving Abdullah and Zahid who found Ishak out on the left, the midfielder crossed perfectly for Eren who finished brilliantly with his left foot to give Ankaragucu the lead.

Four minutes later Ankaragucu doubled their lead, and it was that man Eren who scored again. Zahid found Murat on the left, who played the ball across the face of goal for Eren who made no mistake and made it 0-2.

Into the second half and Ankaragucu sored within a minute of the restart. A great corner from Erdem was headed home by Yusuf who has now scored 3 goals this season. The centre back is showing how important he is to this team at both ends of the pitch.

On 55 minutes, Murat burst forward down the right and cut the ball back for Zahid who shot over from just inside the box. Both players were having an excellent game.

Bursaspor had very few opportunities in the match but Ofosu set up Bruno who volleyed well wide from just inside the box. Two minutes later Matavz almost got lucky as his cross was well saved by Akin. Seconds later Akin made another outstanding save as he pushed the ball onto the post.

Three minutes later Eren Derdiyok got his hat trick Excellent play from Ayiribi and Ishak who combined to set up Eren who had the simple task of putting the ball in the net which he made no mistake. 4-0 Ankaragucu and the fans who were scattered around the stadium were delighted.

Bursa had a couple of chances at the end through Batuhan and Ofosu, while Erdem went close at the other end. But final score was Bursaspor 0-4 Ankaragucu. It was an excellent performance from Ankaragucu with everyone playing their part. Ishak again showing how important he is in midfield, while Abdullah was excellent and had his best game.

Zahid is getting fitter and his quality is starting to show as he was involved in 2 of the goals. While Murat delivered another excellent performance with his hard work and pace in attack.

Next up for Ankargucu is Erzurumspor at home next Sunday. Erzurum are sitting 3rd just one place behind Ankaragucu and the match will be a huge game with both teams fighting for that automatic promotion spot.