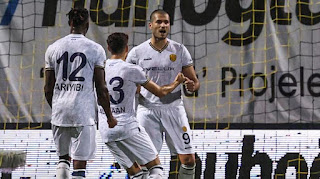 Ankaragucu brought all 3 points back to the Capital after another good win in Istanbul last night. The team have now went 4 games without conceding a goal and a lot of that is to do with the brilliant Yusuf Abdioglu, Akin Alkan and Erdem Ozgenc.

Mustafa Dalci went with the same team that won at Gencler last weekend as the team now starts to take shape.

The first chance of the match came on the 14th minute as Muammer saw his shot from outside of the box go wide for the home side. Three minutes later Ankaragucu had a chance at the other side but Gbolys cross was behind Yusuf who headed wide.

Just after that Abdullah gave the ball away in midfield to Valon who shot from distance but Akin saved comfortably.

On the 25th minute Istanbulspor had a big chance to take the lead after Ibrahim set up Kagan who shot inches wide of the post. Five minutes later at the other end Abdullah crossed for Eren who saw his shot well saved from Alperen.

A minute later and Alperen was called into action again with a great double save. First from an excellent Ali Kaan volley, and then he reacted quickly to the Eren rebound. The match was end to end now and Valon beat Erdem before shooting wide for the home side.

Thiago Pinto then brilliantly set up Ishak but he got his shot all wrong and fired well wide of the post from a good position.

Then came the opening goal on the 39th minute. Excellent play from Gboly who skipped past his man in the box but Patrick brought him down and the referee awarded a penalty. Up stepped Eren Derdiyok to make it 2 goals in 2 games and give Ankaragucu the lead.

A minute later some nice play down the right from Murat to set up Ali Kaan but he shot wide and should have done better.

Istanbulspor almost got back into the game in the 66th minute when a cross into the box was sneaking in at the back post but for a brilliant save from Akin.

Ali Yasar had a chance near the end but his shot was saved by Akin, and then Aatif had a chance to finish it when he had two men in space but decided to go alone and was to slow to get his shot away as the defender got back to block.

Ankaragucu 1-0 winners in the end and another good result which see the team sitting in 3rd behind leaders Umraniyespor and Eyupspor.

Some excellent performances with Yusuf and Erdem in particular showing their value at this level. The only criticism i would have is the insistence in giving Geraldo an opportunity. He still hasnt registered a single goal or assist in his Ankaragucu career and was hopeless again last night. It would be better to give Atakan Dama a chance in the team.

Next up is Menemen on Monday night, another difficult game but with the home crowd behind them Ankaragucu should be well up for it.