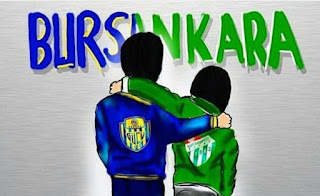 The Bursaspor vs Ankaragucu match is one of the most colorful in the Turkish football calendar. Turkey is notorious for football rivalries with fierce atmospheres that can lead to crowd trouble and violence. Bursa vs Ankaragucu has a history of friendship that goes back to Abdulkadir Bayraktar who was a Bursaspor ultra leader that would also go and watch Ankaragucu matches.

Sadly Abdulkadir passed away in the 90s and both sets of fans came together to forge even stronger relationships in tribute to their great friend.

Both Ankaragucu and Bursaspor are clubs with huge potential but due to miss management and financial problems, both clubs are playing their football in Lig 1. Ankaragucu a club from the Capital of Turkey in a city of close to 6 million people. Bursa a city that see most of the local population support Bursaspor instead of the Istanbul clubs.

Turkey has so many Historical clubs with decent sized fan base including Ankaragucu, Bursa, Kocaelispor, Sakaryaspor, Karsiyaka, Eskisehirspor and Sanliurfaspor to name a few. Instead we are seeing more municipal clubs with no fans climbing the leagues. For the sake of Turkish football, those in charge of the game need to do more to fight corruption and look after these historical clubs. Unfortunately, those who run the game are likely involved in the corruption and politics that prevent the Super Lig from moving forward with all the untapped potential.

Sunday will see two of those clubs face each other in what is a huge match at this early stage of the season. Ankargucu will be looking to bounce back from their 2-2 draw with a win and keep the pressure on leaders Umraniyespor. While Bursa need the 3 points to get their promotion hopes back on track.

Ankaragucu played well in spells against Menemen on Monday night. Gboly Ayiribi impressed again while both Erdem and Yusuf came up with big moments again despite both being at fault for the first goal.

The main issues the team faced was being too suspect to the counter attack and the pace of the Menemen forward line. Abdullah Durak was also the only defensive minded midfielder to start. You can see Abdullah Durak was a quality player in his time, but his fitness is a big concern and he was again taken off early in the game. Ishak Cakmak must return to the starting line up on Sunday as he was a big miss from the team until he came on in the 2nd half.

Erden Derdiyok has answered all his critics (me included) with 3 goals in 3 games and has shown if the chances are created for him, then he will finish them. Zahid had a poor debut overall but again showed glimpses of his quality. He needs more games to get his fitness up and i have no doubt he will become key player for the team.

Geraldo again found a place in the team for some unknown reason. He has now been involved in 24 games for Ankargucu and has 0 goals and 0 assists. Cem is back and Owusu should be back for Sundays game which should see Geraldo either on the bench or left at home. Personally i would look at terminating his contract and instead give Atakan Dama an opportunity. Ankaragucu have some talented players but none of them are getting any meaningful minutes at the moment.

Bursaspor started the season with a draw and  3 straight defeats, but since they strengthened the team on transfer deadline day they have followed that up with an excellent 4-1 win over Samsunspor and a 0-0 draw at Tuzlaspor.

Namiq Alsagarov was a major coup for Bursa after signing him from the Azerbaijan league where he was top scorer. He will be the key player along with other big signings Elton Acolatse and Massimo Bruno, while they call also call upon the experienced Tim Matavz.

Former Ankaragucu left back Onur Atasayer is the starting left back for Bursa and a good player at this level, while Hasan Ayaroglu is also available for selection.

Ankaragucu will need to be at their best and defend better if they are to take anything from this game. Its a tough place to go and with Bursa improving their form of late its a match that can go either way.