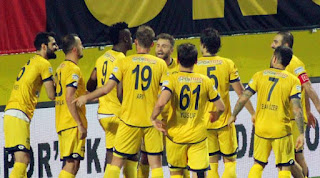 Mustafa Dalci will take his Ankaragucu team to Istanbul on Thursday looking to take all 3 points against Istanbulspor. Dalci was Manager of Istanbulspor last season guiding them to the playoffs after he left his position at Ankaragucu.

After a good win over Genclerbirligi in the Derby on Sunday, confidence will be high in the Ankaragucu dressing room. The first half performance in particular would have been pleasing for Dalci who has come under a lot of pressure from the fans.

Erdem Ozgenc and Ali Kaan were the standout performers on Sunday and are both becoming key players for the club. Erdem in his 2nd spell with the club is defying the odds at 37 years old the way he gets up and down the pitch. While Ali Kaan is showing the kind of performances that have some him become a regular in the Turkey U19 National team.

Murat Ucar and Ishak Cakmak are also becoming important players for the team with their work rate and energy. Abdullah and Eren will have benefited from the minutes they both played as they look to gain match fitness.

The 2nd half against Gencler was a bit stale after the changes that were made. Both Aatif and Zahid are still quite a bit away from match fitness but overall their were glimpses of potential in the team when everyone is fit.

The last time the two sides met was back in 2018 as Ankaragucu won 2-1 thanks to a Lanre Kehinde winner in Istanbul. That goal turned out to be one of the turning points for Ankaragucu in their bid for promotion. Thursdays match could be equally as important even at this early part of the season.

After defeats against Manisa KF and Urmaniyespor, Istanbulspor followed up with a good 3-0 win against Altinordu at the weekend under new Manager Osman Zeki Korkmaz who incidently was Ankaragucu Assistant Manager under Ismail Kartal in the Super Lig.

They will likely play a 4-3-3 formation with Valon Ethemi and Ibrahim Yilmaz their key players. They will be looking to take all 3 points from the match and build on their win against Altinordu. As the games come thick and fast there are no easy games in this Division.

It will be interesting to see how Ankargucu line up. Will the likes of Erdem, Eren and Abdullah be able to play 2 quick games in succession. Or will their be opportunities for Nadir Cifci and others to step up. Owusu is still out and will likely return for the Menemen game next Monday.

As usual, we will have all the latest team news and match report here and on our Twitter page.