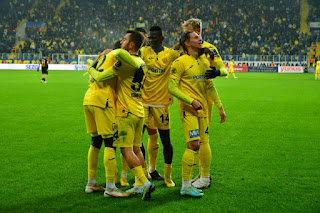 After 2 defeats since the Super Lig started back Ankaragücü need a win today as they have been pulled back into that relegation battle. Kayserispor were without some of their key players which added more pressure for Ankaragücü to take all 3 points.
Team - Bahadir, Malcuit, Nihad, Uros, Marlon, Diack, Tolga, Taylan, Beridze, Emre, Ali Sowe
Subs - Nurullah, Macheda, Arda, Furkan, Tasos, Atakan, Pepe, Pedrinho, Firatcan, Oguz
Kayserispor started the match brighter and we’re getting joy down that right hand side of Ankaragücü. Kemen and Mane both had early chances but neither could hit the target when they should have done better.
Kayserispor would take the lead minutes later. Marlon was caught out down the left hand side and the ball was played into the box for Cardozo who put the ball past Bahadir to make it 0-1.
Ten minutes later former Ankaragücü player Ilhan Parlak hit the post from a free kick which looked like Bahadir also got an important touch.
Ankaragücü only sprung into life in the last 15 minutes of the half and on the 37th minute Ali Sowe got them back on level terms. A great ball into box from Marlon and Ali brilliantly headed into top corner to make it 1-1. He really is such an important player for the team with his all round work rate and hold up play.
Half Time 1-1
Into 2nd half and Beridze had an early chance but Bilal saved easily in the Kayserispor goal.
The 2nd goal came on the 63rd minute, and it was great play from Ali Sowe to set up Emre Kilinc who blasted the ball past Bilal from a tight angle to make it 2-1.
Five minutes later Ali Sowe had another chance after Tolga set him up but he placed his shot wide of the post.
Emre Kilinc was then put through on goal from a long ball by Bahadir but he took a bad touch and Bilal came out to collect the ball.
With a minute to go Malcuit set up Tasos but the Greek winger shot wide with the ball slightly behind him. Marlon made an important challenge at the other end on the counter attack.
Ali Sowe had a chance at the very end but again shot wide and the score remained 2-1 as Ankaragücü took all 3 points. A huge win for the team and Omer Erdogan has them playing some good football.
There were many good performances today especially in the 2nd half but special mention for Lamine Diack, Tolga Cigerci and Ali Sowe who were excellent.
Next up is Adana Demirspor away next weekend!
By Nady - January 08, 2023