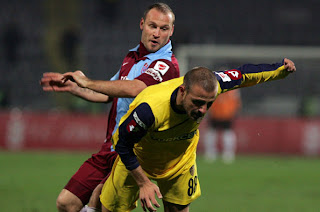 Greetings ladies and gents. I have to tell all of you that this is my first full write up for an Ankaragucu match. I wish that I had better news to provide. The group attending this match consisted simply of myself and Battle Damaged Kanka. Kaleci Kanka Tansu and his buddy from work also met up with us at half time to bolster our numbers. The crowd in general was rather low with probably about 13,000 supporters in attendance. The Trabzon side was full.

The game started off strong with Ankaragucu having a much stronger drive than Trabzon. We especially saw a strong push from Broggi, Weeks, and Metin. The new captain, goalie Serkan, (welcome back!) was also on his game and very actively organizing the team.

Ankara had several chances throughout the first half with a close corner in the 23rd minute and then a strong free kick in the 30th which was gobbled up by the Trabzon goalie. From time to time, Ankara also had to scramble back and save a Trabzon fast break. This pattern of measured and consistent pressure pierced by Trabzon breakaways was the general cycle of events in the first half.

As the first half carried on, the field got more and more slick. Rain started in the 10th minute and got stronger as the half continued. Play got more scrappy and by the end of the half, the players were all slipping on the grass. A combination of this slipping and scrappiness led to Bebbe (again welcome back) being injured at the 37th, although he did, in the end, stay in the game.

The second half began at a similar pace as the first half, but a goal in the 52nd minute by Umut Bulut opened scoring for the Black Sea Storm. It was, ofcourse, a fast break where Serkan was baited and had little chance of making a save. Ankaragucu did continue to put on the pressure, but as the game entered its last third the curse of Mr. Lentil reared its ugly head again. Mr. Lentil missed a header at the 59th minute and then 10 minutes later had a HUGE defensive collapse to bring us to our final score of 2-0. The attacker for Trabzon essentially blew by Mr. Lentil.

In one sense, Mr. Lentil probably did the team a favor. He galvanized all the fans together. Oddly, Gecekondu were all spread out throughout 19 Mayis stadium for this match. According to our friend Tansu, the fans were demonstrating their support/ opposition to Little Gokcek based on where they were sitting. Yet, following Mr. Lentil’s lousy defensive skills, the stadium sung as one to “boo” him any time he came near the ball.

The game ended with the team looking lost and frustrated. It was a very different image than the one the team projected at the beginning.

With only 10 days until the league starts up again, I hope that the team and Coach Lemerre can pull themselves together and play as a team.