THE KANKAS TURN-OUT IN STRENGTH TO BID FAREWELL TO ANKARAGUCU 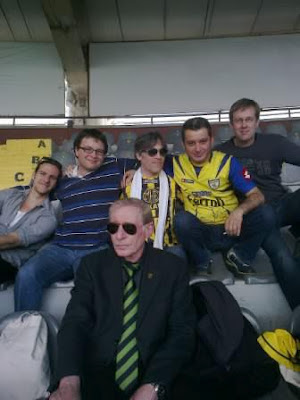 The largest turn-out of kankas of the season were in the Stadium yesterday to bid farewell to Ankaragucu as they exitted the Super League and were officially relegated to The Bank Asya League.

In attendance were Oz Kanka Chris, Little Oz Kanka Mathew, Maniac Kanka Harun (his mummy gave him permission to attend a match at last !!!), Battle Damaged Kanka Damon, Kaleci Kanka Tansu, Flying Dutchman Kanka Carlo, Cider Kanka John, No Name Kanka Simon and yours truly. We also had two guests from Down-Under, Michael and Jordy hail from near Melbourne, and are on a cycling holiday in Turkey.

Kayseri showed no mercy to Ankaragucu as they gave a footie lesson in the art of possession and clinical finishing.

Gecikondu was full as usual with only a small group in Maraton, and Gecikondu kept us entertained throughout the match with their singing. There was also a lady assistant referee on the main stand line who entertained us, but in a professional sense, she did a good job.

It only took Kayseri 13 minutes to open the scoring when Kujovic knocked in a rebound shot which came off the post.

Ankaragucu was making the odd foray into the Kayseri half and on 17 minutes brought out a good save from Gokhan in the Kayseri goal.

Kayseri should have made it 2 a minute later when a one-on-one with Bayram was saved but the rebound was goalbound until a goal line clearance saved the day. A few minutes later it was almost 2 when a great header hit the bar with Bayram beaten.

However, the 2nd goal duly arrived on 34 minutes when Kujovic again scored. I didn't actually see it because I was writing in my notes that Gecikondu was chanting for President Obama to resign !! Don't ask me how they arrived at that piece of nonsense !!!

No 3 arrived a few minutes later when the cut-back arrived in the box for Troisi to tap in for an easy goal.

Ankaragucu almost made the break through just before half time when a rocket just outside the box when just past the post and Kaan brought out a great save from Gokhan.

Kayseri continued to dominate in the 2nd half and it took my Man of the Match, Diego, who had come on for the 2nd half as a substitute, till the 69 minute to make it 4. It was pure class and fashioned by himself as he cut in from the left and let fly with an unstoppable shot.

Atilla should have done better when a mistake in the Kayseri defence allowed him a half chance, but the delayed his shot and Gokhan was able to deflect the ball for a corner.

10 minutes to go and that man Diego again made it 5. He was allowed to waltz past about 5 defenders and score the goal of the match.

With time running out, Gecikondu called Maraton over to the dividing fence for a 'sing-in'. Unbelievable !

Then at the final whistle they called for the players to do a lap of honour which they duly obliged and threw their shirts into the crowd.

So, Ankaragucu bow out, but the players can be proud of their efforts and hold their heads high.

As to what the future holds for Ankaragucu, we will have to see what unfolds during the summer months. As I've said before, this team will not be able to make a quick return to the Super League. The Bank Aysa League is full of strong teams and it will be no picnic for Ankaragucu.

Watch this space for further.