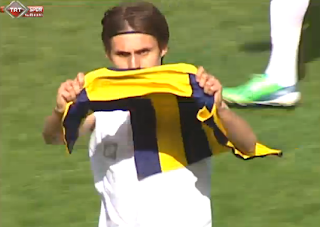 Again a beautiful sunny day. They are saying 22 degrees. Looks even warmer than that though. Hoping this one goes our way, but after so much disappoint this season, I'm not getting my hopes up.

22: GoooooooooooooooL!!!!  Ankaragucu 1--0 Goztepe
Kaan scores in what is a really clumsy looking goal but of course we'll take it. Timur came down the right wing chips it into the box. Kaan tries to head it, misses, but the ball lands behind him and he backheels it into the goal. Hard to tell if it was deliberate or whether he just got lucky.

25: GoooooooooooooooL!!!! Ankaragucu 2--0 Goztepe
This time it is Enes' turn. Timur crosses from the right to Enes right in front of the goal.
Enes isn't able to get control immediately pirouettes and shoots. The two or three
defenders and the keeper are unable to stop it.

35: Goztepe free kick from quite a ways out. Enters the box but it is sent over the goal. No real danger.

37: We've been looking good all match. Nice passing, smooth protection of the ball, and solid defense apart from an early slip up that let Engin go one-on-one with Gökhan. Fortunately, he chipped it wide.

41: Quite the goal mouth melee. We nearly made it 3-0 before Kaan shot over. AG fans on facebook are blaming Kaan for being a ball hog.

42: Dangerous play on the part of Aytaç. The boot to the Goztepe player's face earns Aytaç a yellow. Our second of the match.

45+1: Weeks shoots long range the ball comes off the crossbar and onto the ground right in front of the line. We got really lucky on that one.

Well that's it for the first half. Ankaragucu 2--0 Goztepe

Sure would be nice to be there.


49: Timur nearly puts us three up but shoots just a tad wide. Should have buried that one.

53: We need to be careful. We are starting to get sloppy. Definitely can't afford to give these three points away.

59: Goztepe substitution: Tum on for Saban.

59: Goztepe Gol. Didn't take Tum long. I knew our sloppiness was going to catch up with us.

63: Wonderful opportunity again. Enes and Timur running towards the goal with defenders in their wake. Keeper Ferhat in front of Enes, so he passes to Timur, but he isn't able to get the shot off before the defenders arrive.

70: Goztepe substitution: Kazım on for Ferhat.


73: Teams looking more evenly matched than they were in the first half. We really need to put another one away as an insurance policy.

Not good I seem to have lost the stream. Hopefully I can get it back before I miss something important.

81: Tum gets a yellow for unsportsmanlike behavior.

82: Timur gets a great opportunity but puts it over. C'mon one more Timur, and you are man of the match with your two assists.

83: Another opporunity but Bilal slips before Gokhan's pass can reach him.

86: Gokhan handles a Tum shot on goal with little problem.

88: Girls chanting for the management to resign. Tum looking dangerous.

89: Goooolllllllllllllll. Teoman receives a lovely pass from Hasan Ayaroglu ( who must have come in when the stream was down) while unmarked in front of the Goztepe goal, and does not falter.

90+: We are looking dominant in the dying minutes of this game.

And that's it. Three well earned points for Ankaragucu. Girls dancing misket. This is Ankara! :)

Mustafa Kaplan has the team line up and take a bow before the fans. Good stuff. Now the team is dancing in the middle of the pitch. 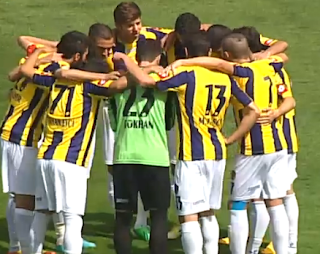 Can you guys in Samsun hear the partying going on? If not, don't worry, we are bringing it to you next week. Brace yourselves.