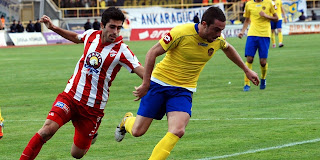 Ankaragucu host Boluspor in the 19 Mayis stadium on Monday night which will be again be attended by women and children only due to the stadium ban. Ankaragucu go into the game on the back of two successive wins which gives them an outside chance in the battle against relegation. Boluspor themselves haven't given up on a playoff place.


Early team news for the visitors are that former Ankaragucu duo Serdar Kulbilge and Abdulaziz Solmaz are both out, as is Engin Akturk. For Ankaragucu they will have to do without Gurkan Alver who is suspended and it looks like Aytac Oden and Serkan Sirin will be unavailable as well.

The last time both sides met Ankaragucu were the better team in a 1-1 draw in Bolu. Ankaragucu took an early lead through Sinan Kurumus, but the visitors shortly equalised through Ali Guzeldal. Bolu have some good players like Serge Dijehoua who is a powerful striker, Iskander Alin who starred for Istanbul BBS in the Super Lig before being released due to his alleged involvement in match fixing. Ali Guzeldal is their star player and they can also call upon the experienced former Ankaragucu midfielder Barbaros Barut.

A fantastic performance from Ankaragucu last week will give them confidence going into Monday nights match. The team have scored 7 goals in their last two games and are playing with no fear at the moment. Timur Ozgoz was outstanding and when he is on form the team performs better. Again Bilal Gulden will be a key player but the loss of Gurkan Alver will be a blow. Youngsters Umut Nayir, Hasan Ayaroglu and Emre Tasdemir are all chapping at the door for their chance.

If Ankaragucu can take the 3 points it will give them a fantastic chance going into the last 3 games of the season. Mustafa Kaplan has done a great job and was even linked with a move to Genclerbirligi at the end of the season. Kaplan quickly denied that he has had any talks with Ilhan Cavcav about a possible move. There is no doubting that some of the clubs above Ankaragucu will be taking and interest in Kaplan. Lets hope he has a long successful career at Ankaragucu.