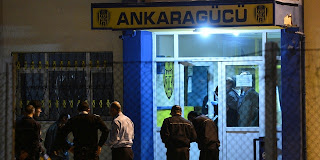 Two masked gunmen fired two bullets at the Ankaragucu training facility in Tandogan last night. The motive of the attack is unclear at the moment but it is believed that it is in regards to Mehmet Yiginer and his taxi company as opposed to the team itself.

Luckily no one was hurt and one of the men is believed to be in custody. The attack happened late last night on the back of the clubs 3-0 defeat at Caykur Rizespor. Mehmet Yiginer and the board of directors hit out at the attack saying the club are doing everything they can to survive and they don't need this kind of behaviour.