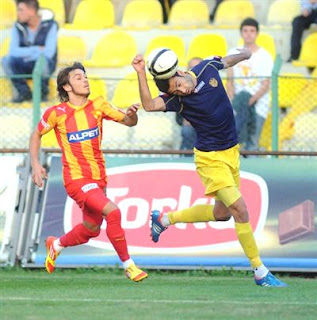 Ankaragucu will host Goztepe at the 19 Mayis Stadium in Ankara tomorrow afternoon. The game will be played in front of women and children only due to the stadium ban. After last weeks disappointing result at Tavsanli, the home side will be looking to restore some pride for the rest of the season. The team prepared for the match today at Bestepe training facility and also celebrated Gokhan Erdogans 22nd Birthday.

Goztepe are also involved in the relegation fight but 3 wins in their last 3 games see them lie 1 point clear of the bottom three teams. Their star player is Ali Kucik and they also have 3 former Ankaragucu players in Theo Weeks, Gokhan Emreciksin and Ergin Keles who has scored 4 goals in 8 games. They can also call upon the experienced Herve Tum and Ali Biligin. Portuguese midfielder Paulinho also looks a dangerous player since his move from Cluj in Romania.

Ankaragucu will hope to call upon Mert Erdogan who missed the last game due to illness. Some of the teams key players have not been at their best of late and will be looking to up their game. The remaining games should be about preparing for next season, players such as Gokhan Akkan, Hasan Ayaroglu and Emre Tasdemir should be given their chance. If Ankaragucu can keep the majority of the squad then there is no reason why they cant challenge for the Lig 2 title.

President Yiginer today spoke of his disappointment at the clubs further 3 match ban and 80,000 TL fine due to the crowd trouble in Tavsanli. The club has paid over 2 Million Lira in fines due to the behaviour of the fans. I urge any Ankaragucu fan reading this to please behave and cut this sort of thing out. We understand the frustration and we all support you in your protest against the people who have caused damage to the club. But have a look and tell me what these crowd disturbances have done other than leave the club with more debt ?