10 Ankaragucu players come to the end of their contract ! 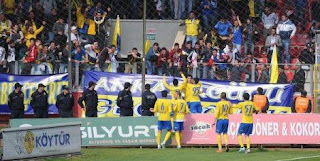 With todays match at Konyaspor being the last game of the season, for many Ankaragucu players it will have been their last game. No fewer than 10 players are out of contract, and the Ankaragucu management team have said they plan to talk to the players over the next couple of weeks.

Its also been reported that Gokhan Akkan is close to signing a new deal with the club, but the fans will also be hoping that we can keep Mert and Gokhan Erdogan along with Enes Kubat. With Bilal already agreeing a move to Antalyaspor and Timur set to leave the club cant afford to lose to many players.

The next could of weeks will certainly be interesting with Mehmet Yiginer and his men having a lot of work to do.
By Nady - May 12, 2013