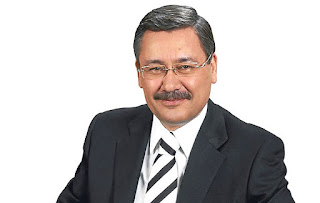 It should have been the start of something big in 2009 when Ahmet Gokcek became Ankaragucu president, along with his Father and Mayor of Ankara Melih Gokcek they promised to make Ankaragucu champions of Turkey. The Ankaragucu tribunes were divided in their support of the Gokceks. Some believed he was trouble after having previous bad experiences with the club, and many supported him mainly due to his wealth. Cemal Aydin paved the way for the Gokceks to take over and in the beginning they made a good start.

The club moved to one of the worlds greatest training complexes in the outskirts of Ankara, quality players such as Geremi, Jerome Rothen, Robert Vittek, Stanislav Sestak and Marek Sapara were brought in. In came former French national team manager Roger Lemerre who would be successful in steering the club clear of relegation. Darius Vassell even commented that things were more professional when the Gokceks came in.

There was no doubting the Gokceks power and influence on the team, they claimed they spent £35 Million on building a new team for Ankaragucu. The fans were happy and the club were slowly starting to take notice. Wins against Istanbul giants Galatasaray, Fenerbahce and against rivals Eskisehirspor started to get the attention of the media who began to talk about a possible challenge from the Ankara club.

The fairly tale didn't last long, as Cemal Aydin had a sudden change of heart and reported the Gokceks to the Turkish courts and TFA claiming an illegal takeover. The Gokceks were also found guilty of having interests in two Turkish Super Lig teams as Melih was chairman of Ankaraspor. The later were punished and expelled from all Turkish competitions (nearly 2 years later they won a court case for their reinstatement back in Turkish football which will go ahead this coming season). The courts also ordered the Gokceks to leave Ankaragucu after their takeover was made null and void.

More embarrassment was brought upon the club when strikers Gustav Bebbe and Darius Vassell were kicked out the Crown Plaza Hotel due to the club not paying the bills. When the Gokceks left Cemal Aydin stopped funding the club, meaning players and staff weren't paid. As the months went by players terminated their contracts due to unpaid wages. These the same players that the club paid big money only a few months before. The club received no money for the players leaving but were left will all the outstanding payments for the transfer fees agreed to their former clubs.

Their was unrest between fan groups as Anti X stopped going to the games and support the Gokceks, while the Gecekondu who supported Cemal Aydin remained loyal. The club saw so many new presidents come and go, some reported to have taken money from the club. Supporter behaviour became a problem as the club were faced with so many stadium bans due to crowd trouble.

Above is just a brief summary of what has went on in the last couple of years. You could write a 200 page book and not cover everything that has went on. Where we are today is what is really important. Mehmet Yiginer a friend of Melih Gokcek is now president of the club. Many question are being asked and the coming weeks are so important as the club fights for its near 104 year survival.

There are reports that Melih Gokcek wants to create a new Ankaragucu, this has been reported for the last 12 months. His club Ankaraspor will return to either the Super Lig or PTT Lig next season. It is reported that he wants to change the name of Ankaraspor to Ankaragucu A.S. It is believed half of the support including Anti X will follow the new created team. This team will just be Ankaraspor with all their history only with a changed name, how any self confessing Ankaragucu supporter can follow them is beyond belief.

The other half of the fans want to remain with MKE Ankaragucu no matter what league they are in and that is where my loyalties and any other Ankaragucu fan should remain. Only this week it was revealed that the new stadium of Ankara will be built on the outskirts of Ankara much to the disgust of Ankaragucu and Genclerbirligi management and supporters. They wanted to remain in the Genclik Park area where the current 19 Mayis Stadium is located.

According to sources, Ankara sports minister Suat Kilic and the Ankara football clubs wanted to remain in the current location but Mayor of Ankara Melih Gokcek ordered the stadium to be built at old Eskisehir road. Why ?? He wants to knock down the 19 Mayis stadium and build on the land which he has wanted for a long time. Questions need to be asked, what has the motives been in the last couple of years for the Gokceks ? He has destroyed a 104 year old institution and community, he has also done the same with 2 other clubs in the past.

The only way the Gokceks can find any support from the hardcore Ankaragucu fans is to help the current MKE Ankaragucu and keep its history. Anything else is unacceptable. One thing is for sure, you cant trust a Gokcek.
By Nady - May 24, 2013