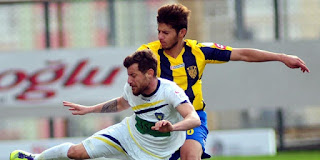 Ankaragucu youngster Bilal Gulden has today agreed a 4 year deal with Turkish Super Lig side Kayserispor. Bilal was expected to sign for Antalyaspor but Kayseri have come in at the last minute to snatch the 20 year old from under their noses. Bilal was out of contract but the club will receive a small amount of compensation due to him being under the age of 21.

The German born midfielder caught the eye of Super Lig teams after a string of excellent performances in the second half of the season. Kayserispor are known for giving young players a chance and it is a good move for Bilal who will look to hold his own against some of the best players in the Turkish Super Lig.

The Round Ball in Ankara would like to wish Bilal all the best with his move to Kayserispor and thank him for all his efforts at Ankaragucu.
By Nady - May 21, 2013