Timur Ozgoz named Round ball in Ankara player of the season 2012/13 ! 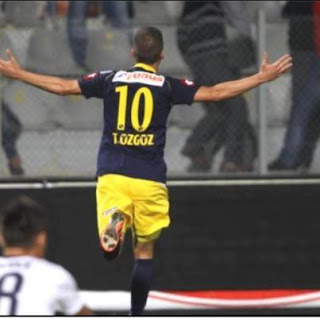 The Kanka group have spent the last couple of days voting for their player of the season for 2012/13. We are delighted to announce that Timur Ozgoz is the winner of that award. He faced competition from other nominations Gurkan Alver, Mert Erdogan, Kaan Kanak and Gokhan Akkan.

I dont think anyone car argue against the decision to award Timur player of the season. The others mentioned have had good seasons, but Timur has been the most consistent and to score 13 goals with 9 assists for the team who finished bottom of the table is pretty impressive.

Its not only the goals and assists that has caught the eye, Timur's work rate and commitment to the team and his leadership qualities have all added to his overall game. Timur had to wait a couple of years before making his Ankaragucu debut since his move from Tennis Berlin. He had two loan spells, one at Polatli Bugsas and another at German amateur team BFK Viktoria.

It was this season where he made his debut on the opening game of the season at Kayseri Erciyesspor. Timur has also built up a good relationship with the fans as well as donating his bonus money to deprived Kids with disabilities.

We at the Round ball in Ankara would like to congratulate Timur on his award !
By Nady - May 14, 2013