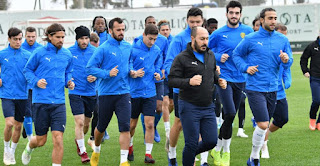 The Turkish Super Lig returns this weekend and will be met with great anticipation by most Super Lig fans apart from Ankaragucu. They face champions Galatasaray in Istanbul and go into the match after a turbulent couple of weeks where Bayram Bektas resigned and a host of players terminated their contract with the club due to unpaid wages.

Bayram Bektas took control of only 1 Ankaragucu match before resigning last week. He was promised that the transfer ban would be lifted allowing him to bring in new players. Unfortunately Mehmet Yiginer has been unable to lift the ban which leaves Ankaragucu in a vulnerable position as they dont have the squad capable of avoiding relegation. If they dont find a way of lifting the transfer ban, its almost certain Ankaragucu will be relegated to Lig 1.

Lanre Kehinde has moved onto Denizlispor, Anton Putsila to Altay and Erdem Sen has signed for Chaves in Portugal. Youness Mokhtar and Johannes Hopf have terminated their contracts while El Kabir and a host of other players remain unsettled due to the current situation.

Mehmet Yiginer claimed yesterday that the foreign players have now been paid with the exception of 1 or 2 who will be paid in the coming days. They will then look at paying the Turkish players. Choosing to pay foreign players first over Native players will do no favours for team harmony and new coach Mustafa Kaplan has a massive job on his hands.

Mustafa Kaplan is now back for his 3rd spell as Ankaragucu manager. His previous two spells ended in relegation from Lig 1 which to be fair to him was a tough task as he only had youth players to call upon. His 2nd spell was unsuccessful in Lig 2 where he was sacked by Mehmet Yiginer. He was brought back to the club last week as Director of Football but immediately offered the position to replace Bayram Bektas when he resigned.

Mehmet Yiginer stated they have full trust in Mustafa Kaplan which is very odd when he has sacked him previously and let him walk away without offering a contract on the other occasion.

Ankaragucu also have a host of injury problems with the likes of Erdem Ozgenc and Yalcin Ayhan struggling for fitness ahead of Saturdays game with Galatasaray. It leaves Mustafa Kaplan short of options and a massive task on his hands to come away with a positive outcome.

Galatasaray themselves are looking to get their season back on track as they sit 5th in the table. Its a must win match for them and they will be able to call upon new signings, former Ankaragucu player Emre Tasdemir and Marcao the Brazilian defender signed from Portuguese side Chaves.

The Istanbul sides main dangerman will be Henry Onyekuru and he will be the man Ankaragucu will need to pay most attention to. Unfortunately i cant see anything other than a Galatasaray win in this one and we can only hope the transfer ban is lifted in time for our next home match.
By Nady - January 16, 2019