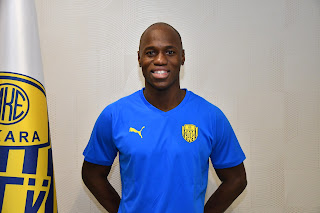 Another busy day for Ankaragucu as the club have completed the signings of 2 more players, with at least 1 more expected before tonight's deadline.

Jamaican International striker Dever Orgill has signed a 1.5 year deal from Austrian side Wolfsburger and stated that his decision was made due to the atmosphere created by the Ankaragucu fans. The forward is highly rated by his former club and is an all action type player who gives 100 percent every time he is on the pitch.

Joining him is Argentinian midfielder Miguel Canteros who has singed on loan until the end of the season. The former Velez Sarsfield player has been recently playing in Brazil and is looking forward to the next chapter in his career.

On the way out of the club is Kenan Ozer who has signed for Gazisehir and Erdem Ozgenc who signed for Genclerbirligh. Both will be missed after a fantastic couple of seasons where both players gave everything for the club and were key to getting Ankaragucu back in the Super Lig.

Moestepha El Kabir has also left the club after agreeing a 350K move to Qatarai Side Al Rayyan.
By Nady - January 31, 2019