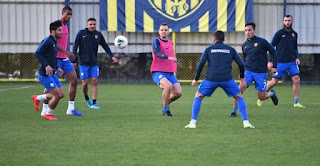 Firstly and most importantly, Fatih Mert is the new Ankaragücü president after being elected today at the clubs congress. In true Ankaragücü fashion, it didn’t go by without incidents as one of the clubs respected delegates Ali Ihsan Mutlu was attacked by Mehmet Yiginers men after he spoke out against the clubs financiers and asked for answers. Ali Imdat hat to intervene to stop Ali Ihsan being badly injured.

There then began rumours that Fatih Mert had to be persuaded by Murat Agcabag to continue with his bid to become president and when everything calmed down he was eventually elected. The move has been popular with the Ankaragücü support especially with Tamer Acar being his number 2 and both are seen as men who have the best interests of the club at heart.

Hopefully for all involved this is finally the time where Ankaragücü can move on, have everyone onside and start preparing for the January transfer window.

Ankaragücü lost 2-0 at Rizespor last weekend and now drop into the relegation zone, and were also knocked out of the Turkish Cup today after a 1-0 defeat at Kirklarelispir. Berke Gurbuz the 16 year old made his debut for the club.
By Nady - October 31, 2019