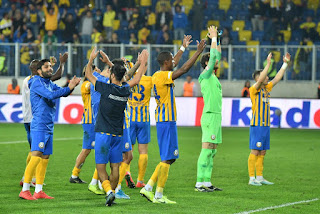 Ismail Kartal is looking to kick start his season with Caykur Rizespor with a victory against his former side Ankaragucu in match that will see both sides fighting for 3 vital points as they fight for survival.

Although a fans favorite with Ankaragucu, Ismail Kartal has come under a lot of pressure from the Rizespor fans of late due to their poor start to the season. The team currently sit in the relegation zone with 8 points, but a defeat in the derby against Trabzonspor, and 5-0 and 5-2 thumping's against Basaksehir and Alanyaspor have saw sections of the support ask for Kartals resignation.

The match against Ankaragucu is now a must win match for Ismail Kartal and his team, or he could face the sack if they dont take maximum points against his old club. Ankaragucu will be coming to Rizespor to spoil the party and relationships go out the door when it comes to winning matches and fighting for survival.

Ankaragucu put up another spirited performance last week in front of a sold out crown in Ankara against Besiktas. Again the Defence and Goalkeeper played a huge part in the result and rightly received all the plaudits from the Ankaragucu fans and media.

Sedat Agcay will miss out due to suspension after receiving a red card last week, but its unclear at the moment if Tito Canteros will be available for selection after injury. If Canteros does make his return, it will be a massive boost for the team and will strengthen the middle of the park.

Apart from that change, it looks like Metin Diyadin will go with pretty much the same team that has been a first pick since the 1st game of the season.

Although the team are in a relegation battle, Rizespor do have some quality players in Fernando Boldrin, Aminu Umar and Braian Samudio in attack who are capable of being match winners on their day. They will however need to tighten up at the back having conceded 12 goals in the last 3 games.

Both games ended in a draw last season when the two sides met, a 1-1 draw in Rize and 2-2 draw in Ankara as neither team could be separated.

In other news off the field, it was claimed today that if Ankaragucu dont pay $3 million dollars in unpaid wages next month to former players then the team will face a 3 point deduction and this was the reason Yiginer called an AGM as they couldnt find the money. The Circus goes on!!
By Nady - October 24, 2019