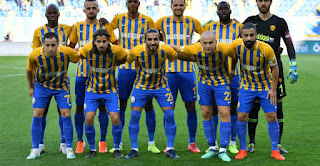 A couple of bits of news before we look ahead to Sundays match at Sivasspor. According to reports Ankaragucu players still havent been paid their salaries despite Mehmet Yiginer promising they would be paid after the derby victory over Genclerbirligi last weekend. No surprises there! The team have also been drawn away to Kirklarelispor in the Turkish Cup on 29th October.

The victory over Genclerbirligi last weekend will have given the Ankaragucu players some confidence going into the Sivasspor match as they look to cause another upset. Despite loosing key player Tito Canteros, the team showed that fighting spirit, and had a bit of luck on their side which saw them run out 2-1 winners.

With Canteros out, it gave 23 year old academy product Hasan Kaya his first start for the club in 4 years. Having spent the last couple of seasons out on loan at lower league clubs including a successful spell at Ankara Demirspor, Hasan was eager to impress for the club he supported as a boy. And what a game it was for the German born Turk with 2 key assists in the goals and an all round tireless performance.

The impressive part of Hasans performance, wasnt just his work rate which you come to expect from youngsters who grew up supporting the club. It was his quality on the ball. He put a number of great crosses into the box including his corner for the 1st goal, and then there was the stunning reverse pass for Kitsiou in the build up to the 2nd goal. Hopefully Canteros is back in the team on Sunday but it must not be at the expense of Hasan.

Dever Orgill will again play a big part in Ankaragucu taking anything from Sundays match. He has one of the toughest jobs in the Super Lig with the amount of work he has to put in chasing back helping his team mates, while trying to put the ball in the back of the net at the other end. He might not score as many goals as last season due to the lack of service, but his efforts certainly arent under valued.

Riza Calimbay and his team will be confident going into this match but respectful of Ankaragucu at the same time. Sivas currently sit 5th in the Super Lig and have had a good start to the season. With the club reportedly being one of the few Turkish teams who are debt free, things are looking pretty optimistic if you are a Sivasspor fan. Just over 10,000 tickets have been sold for the match with the number expected to rise over the coming days.

Key players for Sivasspor are the brilliant Emre Kilinc who ive been a big fan of for a number of years. The good news for Ankaragucu is that he will miss the match due to injury. Mustapha Yatabare is a handful up front and both Pazdan and Kulusic will have a tough battle ahead with the big targetman.

Both Korcan Celikay and Aydin Karabulut had spells with Sivasspor and will be hoping to put one over their former employers.

Jim and some of the other Kankas who arent travelling to Sivas will likely be watching the game in the Alerta bar, if you fancy joining them please get in touch.
By Nady - October 03, 2019