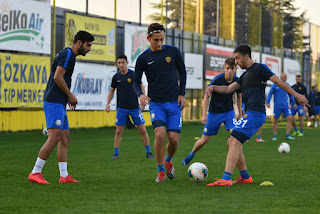 It’s back to Domestic football after a successful International week for the Turkish National team who sit top of their group after a win over Albania and excellent draw at France. The less we talk about the Scotland national team the better.

Onto Saturdays home match with Besiktas and the game is already close to a sell out as Ankaragucu fans have been busy over the last couple of days buying their tickets for another huge match for the club against Besiktas.

On paper Ankaragucu shouldn’t have much of a chance against the Istanbul giants, but Besiktas haven’t got off to the best of starts this season while Ankaragucu have proved difficult to beat despite so much problems surrounding the club both financially and on the playing front where the team are struggling to put a team on the pitch due to the transfer ban and injuries.

Bad news for Ankaragucu is no return of key player Tito Canteros, the Argentinian has missed the last 2 games due to injury but has been back in training this week but still isn’t ready to return. Canteros is in the top 7 midfielders in the Super Lig in terms of key passes and will be a big miss.

As we have mentioned so often this season, the back 4 for Ankaragucu and Korcan have been vital in the 8 points they have collected so far. Kitsiou and Pinto are both big players in attack and defence, while the two centre half’s Pazdan and Kulusic have been solid for most of the games.

Korcan Celikay is the highest rated Goalkeeper in the Turkish Super Lig this season in terms of Saves made per match and will have another busy day ahead of him against his former club.

Besiktas have the same amount of points as Ankaragucu so far which is unacceptable for a team that has the players they have in their team. Although they don’t have the quality as past Besiktas teams have due to the financial situation in Turkey, they still have good players in Lajic. Burak Yilmaz. Hutchinson, Vida and former Ankaragucu winger Tyler Boyd and a host of other players who would walk into the Ankaragucu side.

Both Oguzhan Ozyakup and Dogurkan Tokoz are injured for Besiktas and will miss out. Tyler Boyd hasn’t had the best of starts to his Besiktas career and has come in for a bit of criticism as he hasn’t reached the levels of performance he produced last season. Ankaragucu fans however will know the quality he possesses and Pinto will have to be at his best.

Although Abdullah Avci hasn’t got off to the best of starts with Besiktas, they had a good win last time out against Alanyaspor with Abdoulay Diaby impressing and they will be hoping to continue where they left off going into the weekends math with Ankaragucu.

Besiktas won both games 4-1 last season, although the game in Istanbul was a bit flattering for Besiktas as Ankaragucu played well in that match but luck went against them on the day. There is no doubting Ankaragucu are going to need all the luck they can get on Saturday and will be hoping Denver Orgill can come up with something special up front and the 20,000 home fans can spur the team on. You have to go back to 2011 for the last time Ankaragucu best Besiktas.

Let’s hope we can take something from the game on Saturday and give the fans something to cheer about.