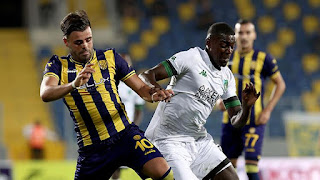 Chaos is the only word to describe the first game back at Eryaman in 1.5 years for Ankaragucu fans. Most clubs worldwide have flocked back to their Stadiums with the opportunity to see their teams for the first time since restrictions have been eased.

Ankaragucu however had less than 1,000 fans turn up to watch the match despite 9,000 tickets being available. Most fans have decided to boycott Faruk Koca and his Management team for the dreadful team they have assembled but more to do with the lies and lack of transparency that goes on at the club. Other fans were locked out due to the testing process, and others decided to leave the stadium with rival fan groups fighting each other.

That was as exciting as it was going to get, as yet again the product served on the pitch by Faruk Koca and Mustafa Dalci is awful to watch.

Kwabena Owusu was ruled out due to injury which was a massive blow before kick off. Despite 8 players being out with Covid and Injury there was no place for academy players in Mustafa Dalci team.

Instead he decided to fill the team with old, slow players and three defensive midfielders. No surprise that Ankaragucu only managed 1 shot on goal the whole game. Yasin Gurler made his debut at left back and delivered the worst performance of any Ankaragucu player ive seen in the last 12 years. Eren Derdiyok had that title just last week.

Eren has now played 2 games with no shots on goals and has more yellow cards than shots on target. Its incredible to think he is on 400,000 Euros, a player who is finished. To be fair to him, the service provided by the wing backs, wingers and midfielders was non existent.

I have also never seen a team as unfit as this Ankargucu team. Abdullah Durak and Huseyin Acar are two of the main culprits and no player should deserve to wear the Ankaragucu jersey unless they at a very minimum are in good shape.

The first chance of the game came on the 37th minute when Benhur saw his shot blocked by Ishak when he looked certain to score. That would be the only chance of the first half for either team as Ankaragucu were booed of the pitch by the small number of fans who were there.

Into the second half and Yilmaz had a shot from the edge of the box go wide for Kocaelispor. Ten minutes later Akin made a good save from Benhur who again looked certain to score.

Erdem Ozgenc hit the bar for Ankaragucu on the 67th minute before Cem saw his weak effort easily saved by Korcan. That was as close as Ankaragucu came to scoring.

Two poor sides share the points, and going on that performance they both have a fight on their hands to stay in the league never mind promotion. Ankaragucu will be hoping to see Atif, Ariyibi and Owusu back as soon as possible. But even when they do return, Mustafa Dalci will still be manager. Its clear this team will go nowhere under his management.