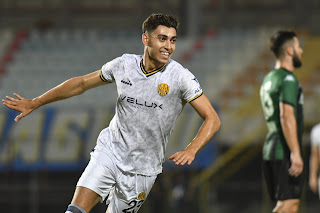 Ali Kaan was the star of the night as he delivered and outstanding performance scoring 2 goals helping Ankaragücü to an excellent 3-0 win at Denizlispor.

First chance of the game came for Denizli as Mustafa shot just wide from 30 yards with Akin scrambling. Two minutes later though Ankaragücü had the ball in the back of the net. A corner from Erdem was brilliantly met by Yusuf who headed past Stachowiak to make it 0-1.

Ten minutes later and Ankaragücü doubled their lead from an almost identical goal. This time Ali Kaan with and excellent header from and Erdem corner to make it 0-2.

Gokhan went close for Denizlispor from a free kick but the ball went inches wide. A few minutes later and Ali Kaan put Murat through on goal with a great pass but he shot straight at Stachowiak.

Ankaragücü were wrongly down to ten men when Cem Ekinci was sent off for a challenge on Mohammed Gonulacar. It was a yellow but definitely not a red and a bad mistake by the referee.

Five minutes later on the stroke of half time, Ankaragücü showed how to deal with adversity, and it was that man Ali Kaan again. He played a nice touch and go with Murat and then burst through on goal before showing great composure to put the ball past Stachowiak to make it 0-3.

Into the second half and Yilmaz saw an outstanding 35 yard screamer come back off the post as Denizlispor looked to get back into the game. Five minutes later Okan had an effort easily saved by Akin.

Any chance of a comeback were dashed for Denizlispor when Erdal Akdari was sent off for a bad challenge.

Ali Kaan continued to impress and this time set up Ayiribi but he shot straight at Stachowiak when he should have scored. Ayiribi and Gerlado both had chances in the dying minutes but neither could finish them. Geraldo continues to waste any opportunities that come his way.

A great result for Ankaragücü with some excellent performances from the likes of Ali Kaan, Erdem, Ishak and Murat. Both Ishak and Ali Kaan showed having players who are in shape and fit in midfield makes a big difference. Eren still continues to be a concern as he failed again to register a shot on goal. Rumours in the press tonight have linked Ankaragücü with a move for Samsunspor striker Nadir Cifci which IMO would be another poor signing.

Next up for Ankaragücü is the derby against struggling Genclerbirligi on 12th September after the International break.