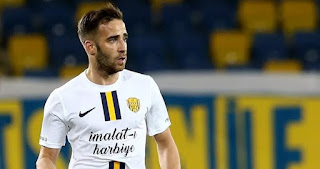 Ankaragucu favorite Stelios Kitsiou today completed his move to Gaziantep FK on a 2+1 year contract and joins Torgeir Borven. Two excellent signings for Gaziantep and both players will likely shine playing in a better team.

Kitsiou has been one of the clubs most consistent players since his move from PAOK back in 2019. He helped the club stay in the Super Lig in his first season and built a reputation as one of the best right backs in the league.

His work rate and fitness combined with his skill and technique on the ball made him one of the most dangerous attacking threats in the team.

Sadly for Kitsiou, things started to turn sour last season as he had a few injuries and wasnt paid his salary either. It is believed Kitsiou was unhappy with the management of the club and that was his main reason for wanting to leave. Most Ankaragucu fans will have good memories of Kitsiou and will wish him all the best.

Some good news for Ankaragucu as Kwabena Owusu and Gboly Ayiribi have both been issued their licence by the TFF and are free to play on Sunday. Both will be key players and give Ankaragucu that much needed pace and power that they need in attack.

TRT will also be the broadcaster for all Lig 1 games this season and you can watch them all on their official website.