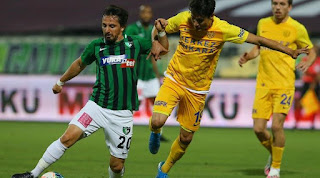 Sundays match has a lot at stake for both Ankaragucu and Denizlispor with both sides still looking for their first win of the season. The two clubs were relegated last season from the Turkish Super Lig and know how important it is financially to bounce back at the first attempt.

Another week has went by and still the lack of information and communication coming from Ankaragucu is non existent. We have no idea how long Owusu will be out for, or the latest with Atif and Ayiribi. We just need to go with some of the photos from the training sessions and it looks like Ayiribi may be available for selection which would be a big boost.

Last weeks performance was as poor as you are going to see from any football team. Although the positive was that we kept a clean sheet. That was more to do with how poor Kocaelispor were, than how good the Ankaragucu defence was.

The midfield and attack in particular were so poor, with no pace, no skill and a clear lack of fitness from many of the players.

Mustafa Dalci looks incapable of learning from his previous mistakes and it will likely be the same rubbish we are served on Sunday night. No creativity from midfield, a striker in Eren who walks about the pitch and has no fitness. And wide players who just dont have the quality in attack.

If Ayiribi and Owusu are available for selection they would be a big boost for Ankaragucu. Both of them have speed and power that is so badly lacking in this team.

The other problem is the lack of opportunities given to any academy players. A total of 0 minutes has been given to academy players over the two league games and TSYD Cup match against Genclerbirligi. Fenerbahce finished their Europa League game last night with a 16 year old, 18 year old and 20 year old in attack.

Former Ankaragucu midfielder Serhat Gulpinar is the manager of Denizlispor and he will be boosted by the new signings his club have made after the transfer ban was lifted earlier this week. They lost 2-0 at home against Bandirmaspor and 1-0 at Manisa FK in their opening two games.

A different Denizli side will be available this week though and Ankaragucu will be hoping for the early settling in issues with so many new players joining at the same time.

Ankaragucu will look to sign 2 more players before next weeks transfer deadline according to WebAnka. Lets hope we have our first win by then and the new signings joining are of the quality needed to get out of this division.