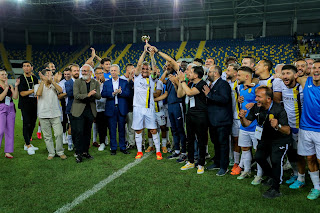 Ankaragücü won the TSYD Cup tonight for the first time in 18 years with a comfortable 3-0 win over Genclerbirligi. It was a first opportunity for the fans to see their new signings in action with some impressing and others with a lot of work still to do.

First half was a bit of a bore fest with Ankaragücü dominating possession but having no cutting edge up front. Ali Sowe was poor and lacked any real quality in attack. Diack and Marlon were the 2 standouts in the first half with Diack winning the ball back in midfield and also good in possession. Marlon was full of energy winning tackles and then getting forward to join the attack.

The teams went in at half time level with no goals for either set of fans to cheer. Only 5,000 turned up for the game which was a pretty disappointing turn out.

Into the second half and Tasos opened the scoring as he cut inside before seeing his deflected shot go into the back of the net to make it 1-0.

Shortly after Sinan made it 2-0 from a corner after a good cross from Sahverdi which Sinan headed home. The final goal came late on after a brilliant give and go between Jesé and Macheda. Jesé then beat his man before putting the ball into the net to make it 3-0.

The performances of Diack, Marlon, Tasos and Beridze in particular will give Ankaragücü some encouragement. The team still lacks any quality in defence and will need big improvements in Ali Sowe. Jesé clearly has the quality but will need to work on his fitness.

The big test comes next as the team take on Konyaspor in the league which will be a very difficult game against a good Konya side.