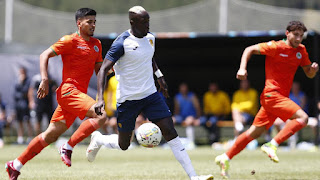 Ankaragücü drew their last pre season game in Kayseri with a 3-3 draw against Alanyaspor. The goals came from Beridze, Atakan and Ariyibi.

It really is incredible we are less than 2 weeks until the season opener and we have Alperen and Sinan as the centre backs, while the worlds slowest midfield pairing of Sahverdi and Abdullah still take the pitch together.

No surprises Alanyaspor took a 3-1 lead in the first half thanks to goals from Oguz Aydin and a double from Efkan. Beridze scored the goal for Ankaragücü.

The second half saw a fight back from Ankaragücü with both Atakan and Ariyibi scoring the goals. Due to  no coverage at the game we don’t know who played well or any other information apart from the goal scorers.

Ankaragücü have their final pre season game next Friday in the TSYD Cup vs Genclerbirligi before the season opener on Tuesday 8th August with a ridiculous 21:45pm kick off time.