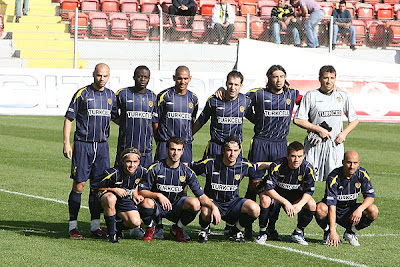 Almost a scare yesterday, but nerves were calmed at the end.

Due to the early KO (1.30pm), I decided to take a nostalgic walk through Genclik Park on my way to the Stadium.

It was a sad journey through the park. It is a shambles and a disgrace. Another reason for Melih Gokcek to hang his head in shame !

I made my first visit to this park back in 1979 and have lost count of how many times I have been there. The old tea house in the shape of a boat in the lake is lying in rubble. Our old meeting venue, Sahil, is also in rubble. But, remember the tree that grew out of the Gents toilet ? The good news is that it is still standing, but surrounded in concrete rubble !!

Into the Stadium then – no queues with lots of gates open (Cavcav please note !!!) - where I was met by Rip Off Kanka Erman resplendent in his suit, shirt and tie who had come direct from work.

A familiar pattern was obvious from the opening minute of the match with ANKARAGUCU attacking and taking the game to the opposition. DISKI were well and truly on the back foot !

Then after just 5 minutes, a text book move down the left wing with Murat Erdogan `losing` two defenders as he cut in from the wing. He looked up and sent in a cross which was met by the inrushing Jaba who flicked a header in at the far post with the goalkeeper stranded. Great goal and the tribunes were in full voice baying for more.

It was still all ANKARAGUCU, but as I have mentioned in previous reports this season, the final pass was going astray. Great footie in their own half and then they seemed to run out of ideas up front !

There was another great chance to go further ahead when a cross came in from Erdogan and Bebbe met it perfectly on the volley, but Kursat in the DISKI goal was having a great game and he pulled off a point blank save to deny what would have been another great goal.

Just before half time Bebbe made amends when he `won` a penalty. He and a defender were chasing a ball in the penalty area (it seemed to me to be a lost cause) when the defender made contact and Bebbe fell face down. The referee had no hesitation and pointed to the spot, but I have to be honest and say that I would never have given it ! I haven’t seen Kirita miss from the spot and once again he blasted his penalty in – it was a screamer of a shot !

So, going in at half time 2-0 up was not bad, and I remarked to Erman that the 2nd Division side would tire in the 2nd half, and with the ANKARAGUCU pressure, concede 3 or 4 more. Wrong !!!

DISKI came out in the 2nd half and were a different team. Perhaps they had been in awe of the Stadium and ANKARAGUCU’s reputation in the 1st half ?? Zafer in goal, who had been a spectator in the 1st half, was now the busier keeper !! ANKARAGUCU was still playing some nice footie in their own half but it was breaking down far too often and DISKI were picking up the pieces when the ball was `given away`.

It was no surprise therefore when DISKI scored half way through the 2nd half. A corner was slung over and Ercan had a free header (where was the cover ??!!). Zafer was well positioned, but parried it up and into the roof of the net. Call it a schoolboy error if you will, and I won’t repeat the adjectives directed towards Zafer around me in the Stadium !

Panic stations ….. all hands back in defence !!! ANKARAGUCU was rocking a little at this stage and Hakan Kutlu calmed the nerves by making some changes which proved crucial. Burak and Bebbe, who were looking tired, were replaced by Murat Duruer and Augustine.

This had the desired effect and ANKARAGUCU came back into the match again and Murat almost had his name on the scoresheet but his rasping shot rebounded off the bar with the goalkeeper well beaten.

However, it was Augustine who changed things around with some great running off the ball and he almost scored with a trademark header near the end.

With the referee looking at his watch, a fast break down the right wing by Augustine and a quick look up …… the cross was swung over two defenders to the incoming Jaba. The goalkeeper came out to intercept, but misjudged the outswinger and Jaba deftly lobbed the goalkeeper for a sweet goal. Another well worked goal !

So, with the Rize Tea Boys beating Besik….spit….tas last night (2-1) it puts ANKARAGUCU top of the group and into the driving seat. However, they will have to up their game for the visit to Ankaraspor in January.

Anyway, ever the optimist, I’m dreaming of a good cup run and going all the way !!!

EDIT: (Thursday evening)Oz Kanka here, just got an e-mail from a bloke I have yet to meet yet.

Dan wrote "Yesterday I was at the stadium as well and even took some photos (http://www.eastsidegraphics.com/ag/) until a steward came over and pointed out that "no photos allowed". Please feel free to use the photos on your blog!"

Cheers Dan. And here's two of the photos. Can anyone actually see Sir Eski Kanka in the crowd shot? By the way, I'm pretty certain taking photographs at football matches is not illegal. 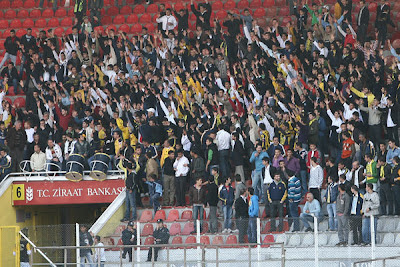