The reason Genclerbirligi are doing better this season

It isn't a classic season for Genclerbirligi but we are doing a hell of a lot better than last year. One of the main reasons for this is thanks to our Brazilian striker Kahe who is scoring at the rate of one every two matches. Last season he wasn't able to hit a barn door.

The reason for his amazing turn around appears to have been the brilliant decision at the end of last season to sack the club's dietitian as we reported here.

As you can see in the image below that was supplied by to The round ball in Ankara by someone who preferred to remain anonymous, five months after Aylin was sacked an unsourced story on sporyolu claims it was Aylin's policy of feeding Kahe purely on Big Macs and steroids that was the reason for him being overweight. This year and on the Atkin's diet Kahe has lost 10 kilogrammes and is now at his perfect match weight.* 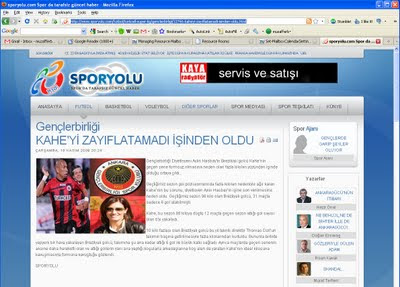 Unfortunately the story doesn't explain how the sacking of cleaners and waiters at the end of last season has improved the club. No doubt we will learn that sometime soon.

* I may have slightly mistranslated the article slightly, so please don't sue.
By Oz Kanka - December 02, 2009