Little Oz Kanka wanted to write today's post. So here he is:

"Gencler beat Galatasaray. Hursut and Orhan scored. You can write the rest Daddy."

A budding blogger if ever I have seen one.

The snow was coming down in both Ankara and Istanbul Saturday night but that didn't stop a decent crowd from showing up at the Beer Bus. No one was expecting much, what with all of our injuries and so we were in shock in the first minute when Hursut had a shot that beat the keeper. A whole 33 seconds in and we were already one nil up. Amazing stuff.

In wounded lion-mode Galatasaray then attempted to throw everything at us. Our defense stood strong though and it was great to see that for the whole match Galatasaray were being forced to make shots from 30, 40 metres out. Needless to say the shots went flying high into the stands.

Then in the 26th Orhan had a shot from an acute angle and amazingly it went in. Two-nil up and I was in shock. We all were. Here was Genclerbirligi, the team beaten by Konyaspor last week, defeating Galatasaray in their final-ever match at Ali Sami Yen. Remember that for future pub quiz nights.

Two-nil up and Gencler seemed to be relying on counter-attacks. Only some good defending stopped us from possibly grabbing another. 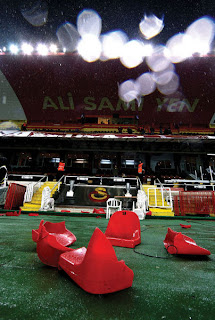 Thanks to HaberTurk for this great shot which sums up the evening from Galatasaray's point of view.


The rest of the match was tense in the sense that I was sure we would find a way of buggering it all up. We didn't though, thanks to great defence. Cheers went up at the Beer Bus as the television showed pictures of fans smashing their seats. It won't happen because the TFF are spineless but wouldn't it be great if the gala opening of Galatasaray's new home ground be a match in which spectators are banned.

That was three points we desperately needed. Happy days.
By Oz Kanka - December 12, 2010