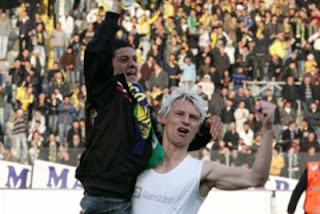 Ankaragucu travel to Sivas on Sunday in yet another vital match in the clubs fight against relegation.

Ankaragucu will be hoping to take something from Sundays match after the humiliating 6-2 defeat at home to Kasimpasa in the Cup on Wednesday night. Ankaragucu have been showing signs of improvement of late with a 2-1 win at Mersin and 0-0 draw at home to Besiktas.

Sivasspor are a very difficult side to beat at home though, They are currently 9 games unbeaten at home with Eskisehirspor the last team to beat them in Sivas. They are also unbeaten in there last 8 games in all competitions. Last week they drew 1-1 away at Eskisehirspor despite playing a big part of the game with ten men. They also won 3-1 against Mersin in the Turkish Cup in midweek.

The two sides met earlier this season in Ankara in which Sivasspor won 2-1. They took the lead through Jan Navratil before Kagan equalised with an excellent strike. Sivas dominated the game and Morten Rasmussen scored the winner.

Jan Rajnoch will be in the Sivas squad and will play against his former employers. Rajnoch left Ankaragucu after the last game between the two sides. Sivas have some very talented players in the powerful Michael Eneramo, Kamil Grosicki who is a tricky winger and Bolivian Striker Ricardo Pedriel.

Ankaragucu will be hoping Turgut Dogan Sahin will be available. The player has been at the centre of a bizarre transfer row between Ankaragucu, Gaziantepspor and Bursaspor. He returned to Ankaragucu today and Hakan Kutlu will be hoping he will be in his team on Sunday.

Another huge game for Ankaragucu who will have to give the performance of there lives to take anything from this game. The elections are been held tomorrow and Erdal Sanli is the leading candidate. I've been informed by our friend Bugra Mete that he is a friend of Ahment Gokcek.
By Nady - January 13, 2012