Four seems to be the magic number 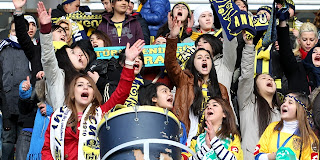 Normally when there is a sinking ship, it is the women and children who are supposed to abandon ship first. In an interesting reversal, however, due to the vulgarity of the  chants employed by Ankaragucu fans in recent weeks, the TFF banned the adult males from the stadium. So the men were forced to abandon the sinking ship that Ankaragucu has become this season, and only the women and children were allowed to "stay on board". They managed to fill the left most section of Gecekondu and their chants could be heard throughout the match, so we must all take our hats off to them.

We must also take our hats off to the squad that once more took on a team that was far superior. Though it didn't take Trabzon's Adin long to score. Gucu managed to play respectably well for most of the first half of the match, and occasionally in the second. Nonetheless, in the end, we once again found ourselves looking at a four-nil score.

I'll be back with more details after the Arsenal-Aston Villa match.

After watching the two Premier League clubs go at it, I have to admit that it is difficult to look back on the football we played this afternoon. Had we played either one of the two teams at Emirates Stadium this afternoon, I shudder to think what the score would have been.

Our starting eleven didn't look so different from last week's starting line up. There was one glaring difference however. As Bora left this past week to go to Antalyaspor, there was a new face in goals, a bearded face. This face belongs to one Bayram Olgun, who, it must be said was NOT the weak link in our squad this afternoon. He did rather well actually in his first appearance. 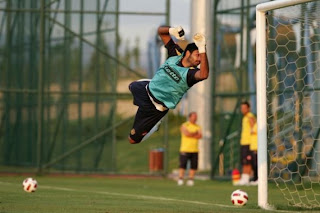 
Before the match even began, it was clear that the MKE Ankaragucu was facing hard times. The pitch looked like absolute crap, almost literally since large swathes were brown. Against this backdrop, Trabzonspor were trying to put their passing game together, and Ankaragucu were fighting hard to keep Trabzon from succeeding, and were doing a decent job of it until former Gencler player Serkan Balci managed to pull off a beautiful cross that bypassed the Gucu defense and allowed Adin to slot it in past Bayram.

So Trabzon were up, but we were not out of the match yet. However, the most worrisome indicator of where this match was going was the fact that even though we were able to strip the ball off the Trabzon players fairly regularly, they would almost always manage to get the ball back immediately after. We weren't able to capitalize on the advantage when we had it.

Ergin was a busy man. In the 25th minute he took a shot from well outside the penalty box but blasted over. About four minutes later some nice passing on the part of our boys nearly got the ball to Ergin in front of the Trabzon goal, but Trabzon keeper Tolga was able to pounce on it before Ergin could get to it. Despite all his running, though, Ergin could just not find an opportunity.

Late in the half Ankara had a free kick, but Tolga didn't even break a sweat in handling it.

Things were just starting to look dire towards the end of the first half when during the 41st minute there was a goal mouth melee in front of our goal, and our defense was completely incapable of clearing the ball. Five minutes later, in extra time, Burak acted like he got fouled just outside the penalty box and was awarded the kick. Fortunately he sent the ball straight into Bayram's arms, and the first half came to a merciful end with us still only down by one. We still had a chance.

However, when the second half came it was Trabzon that came out looking like the improved side. Paulo Henrique came on for Volkan Sen and his speed on the right wing seemed to give Trabzon the edge they needed.


And then it happened. In the 56th minute Trabzon's Mustafa Yumlu launched a wonderful long pass and Burak managed to race ahead past Umit Kurt to go one-on-one with Bayram. Just before Bayram could get to it, Burak chipped it over him and into the net.

Around the 64th minute Gucu's attacking prowess began to look a little better when İshak was nearly able to fire off a shot from close range. Before he could take it, though, Balcı broke up the opportunity. Two minutes later, Ergin took a shot from the top of the box only to see it go slightly wide. And then a few minutes later came our best attempt yet when Gökhan made a beautiful cut back to Serol who unfortunately was unable to get it past Tolga.

Not long after that, Adrian who had come in for Colman got deep into the box on the left and ripped a pass across to Enrique who was waiting by the far post. The pass never got to Enrique though. An unfortunate Ishak in an attempt to block the pass sent it into his own goal. Had he not, though, it wouldn't have mattered. Enrique would have done it himself. Trabzon was up by three. Two minutes later Alanzinho sent a brilliant through pass to Burak who didn't hesitate in putting the sword fully in.

The game might as well have ended there, but we sat through another painful thirteen minutes before the ref mercifully ended the match precisely at the ninety minute mark.

And that is when things got sadder still. The Trabzon players gave their jerseys to the Ankaragucu players, but the Gucu players had to keep theirs because (as we all remember from the Sivas match) they don't have enough to even change at halftime.

Another heart breaking day in Ankara. Next week sees us away to Ordu. This is a match we might stand a better chance of winning. Not getting my hopes up though.