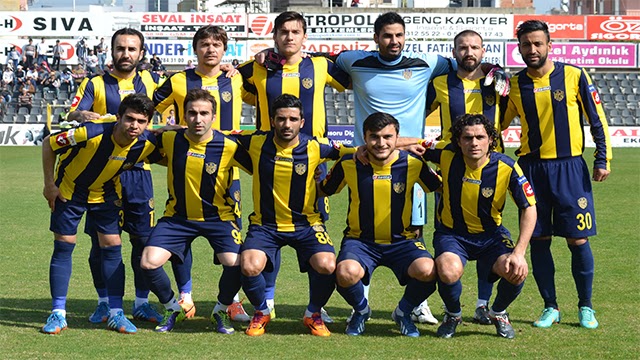 Ankaragucu went down 1-0 in Nazilli today as the home side extended their remarkable unbeaten record to 19 games. Altinordu won 2-1 at home against Iskenderun yesterday while Alanyaspor lost 2-1 at Pazarspor.

There was no live coverage of todays game so we had to make do with updates from Twitter and Facebook. According to the reports Ankaragucu dominated the first half with 6 shots on goal while Nazilli only had the 1. Both Umut Nayir and Mehmet Cakir went close.

The teams went in 0-0 at half time though and Fuat Aykuz was coming in for some stick due to leaving top scorer Levent Kale on the bench for the second game running despite him scoring 2 last week.

Into the second half and again it was Ankaragucu who were still the stronger team and at one point having 11 shots on goal to Nazillis 2. The game looked to be heading for a 0-0 draw until Tuhan Zahid Arslan scored for Nazilli to make it 1-0 with 10 minutes remaining.

The result stayed that way and a disappointing result for Ankaragucu in their battle for the championship. Next up is a home game on Wednesday against Polatli before next Monday nights game against leaders Altinordu. If Ankaragucu are to win the championship they need to start winning the big games. They have failed to beat Diyarbakir BB, Tepecikspor, Alanyaspor and now Nazilli who are tough teams.

The Ankaragucu management team have spent a lot of money building this squad for Lig 2, they should be sitting at the top with the quality and experience they have. Lets hope this is a kick up the bum they need.
By Nady - February 23, 2014