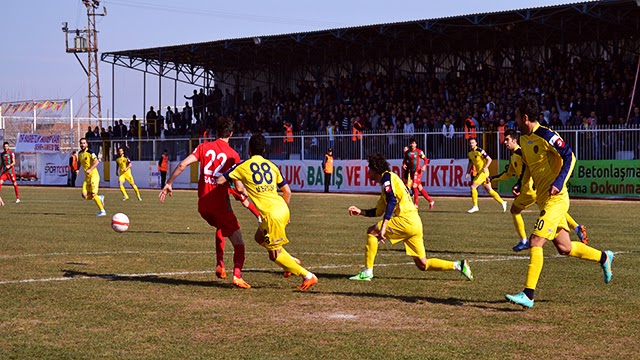 So i make it 2 weeks in a row I've called the correct outcome of the Ankaragucu match, today i was hoping i would get it wrong and Ankaragucu would win against on form Diyarbakir BB. Things remain the way they started at the beginning of play today as Altinordu drew 0-0 at home to Alanyaspor therefor lead Ankaragucu on goal difference at the top with Alanya 1 point behind.

Manager Fuat Aykuz made a number of changes with Metin replacing Aytac at right back, Selim Teber moving into the centre of defence with Erhan dropped to the bench with Kaan Kanak and Serkan Sirin replacing Umut Nayir and Volkan Yilmaz in the starting line up.

It was Diyarbakir who took an deserved early lead through Mert Somay on the 10th minute. The goal came as no surprise with Ankaragucu under pressure right from kick off. The score stayed that way till half time. The Ankaragucu fans who managed to get into the match weren't happy with the way the team played, some questioning the amount of changes since last weeks win over Eyupspor.

Into the second half and it looked like Diyarbakir would hold on for the 3 points until substitute Umut Nayir grabbed a late equaliser. Some questions will be asked why Umut didn't start the game after forming an excellent partnership with Levent Kale this season.

As both myself and Jim said at the beginning of the week, a point at Diyarbakir isn't a bad result. They have now gone 10 games unbeaten and it keeps us level with Altinordu. We do still have to go to both Altinordu and Alanyaspor though and if we want to be champions we will need to take 3 points from these games.

Next up is a home match next Sunday with Korfez so another difficult match awaits. Alanyaspor are at home to Kizilicahamamspor while Altinordu travel to Bozoyukspor. It looks like Bozoyuk will see out the season despite their financial woes.

The match preview of the Korfez match will be on the blog midweek.
By Nady - February 09, 2014