ANKARAGUCU MAKES A STATEMENT OF INTENT

It was an extraordinary feeling when I arrived at the Stadium today. Two amateur matches were being played on the Astro Turf pitches outside the Stadium and on a …. Wednesday afternoon ! Doesn't anyone work on a Wednesday I asked myself ?

As I was watching I was met by Gecikondu Kanka Ozan's dad and his friends. Obviously, they send their best regards to the kankas, especially Nadeem and John who visited them in their home not so long ago.

An amazing turnout for a Wednesday afternoon with Gecikondu full and Maraton almost full. I counted 12 souls in the away end !

I was joined in the Stadium by old friend Murat Kaya and his friend Ismet. Incidentally, Ismet's father is the man who wrote the famous 'History of Ankaragucu' book, which obviously is a MUST READ for all Ankaragucu fans. 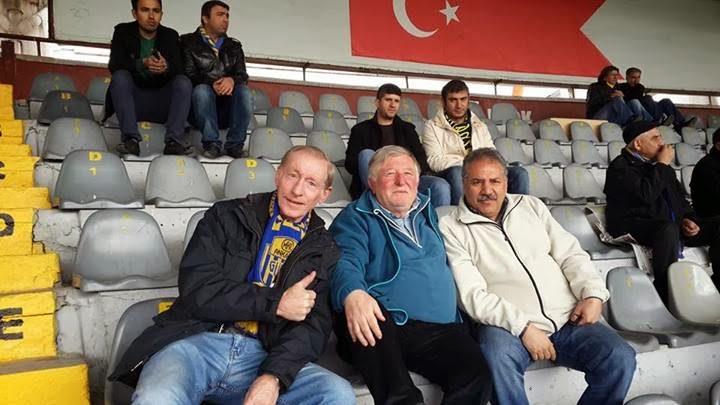 The match kicked off in February sunshine and passing clouds, and as I said last week, freaky Spring Time weather for Winter in Ankara.

It was pretty much end to end stuff until the 16th minute when we had the usual Bursaspor chorus, but 2 minutes later Ankaragucu should have opened the scoring. A great run down the left by Man of the Match by a mile, Emre, and the cut back to Levent, but his poor shot was easily cleared.

Emre was causing all sorts of problems for the Bugsas defence but all his good work was being wasted in the final third. It was all huff and puff from both teams until shortly before half time when the break through finally came.

There was a foul on the perimeter of the Bugsas penalty area, which for me, was inside the box. However, the referee chickened out and gave the free kick on the line..... cluck cluck cluck. Much screaming and shouting from the tribunes with me included.

The free kick was taken by Erdem on the right of the penalty box and he curled a beauty into the top left hand corner of the goal to open the scoring in spectacular style.

Half time with tea a la Murat and then into the 2nd half. 5 minutes in and Bayram got into the action by making his first serious save of the match. Perhaps that's an injustice on Bugsas because they looked pretty good on the ball, but the Ankaragucu defence was in fine form today to thwart their attacks.

10 minutes into the 2nd half and the game was made safe. A school boy error from one of the Bugsas defenders allowed the ball to squirm away to Volkan Yilmaz who had a one-on-one with the goalkeeper and slid the ball into the right corner for the 2nd goal. Cue …. quadraphonic chants from the 4 tribunes yesssssssssssss.

20 minutes later it should have been 3 when Emre picked up the ball in the centre circle and went on a mazy run past defenders and only a finger tip save from the goalkeeper prevented the goal.

Into the last minute of the match and it should have been 3 again when a cross came in and (couldn't see who it was) the Ankaragucu forward had a goal bound header tipped over by the goalkeeper in what was the save of the match.

Time added on and everyone heading for the exits, but not Eski. I wasn't convinced that it was a done deal with Bugsas still pressing for a goal.

Then, after a Bugsas attack had petered out, there was an Ankaragucu breakaway with Kaan chasing down the right wing with defender haring after him. Time to look up and deliver a cross which was helped on its way to Emre lurking on the left. Time to put his head down, foot over the ball and deliver it into the right corner for another great goal.

Well done lads. First half not so good, but a professional performance in the 2nd half to thwart a handy Bugsas team.

It will need that type of effort next Monday in BOTH halves to secure a win against Altinordu.