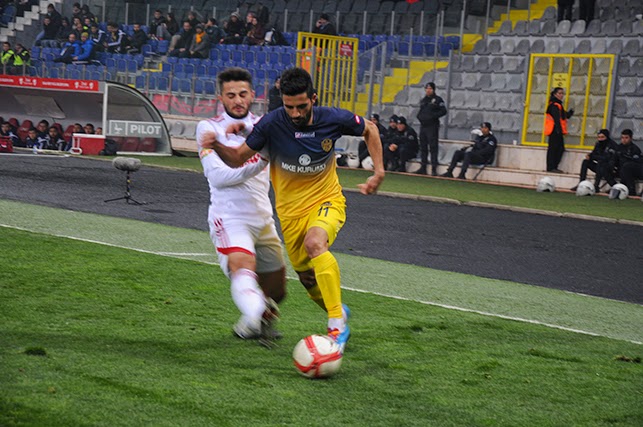 Ankaragucu will be disappointed that they didn't take all 3 points today in after drawing 1-1 at home with Sivas 4 Eylul. Mustafa Kaplan went with an attacking line up with Teoman and Umut playing up front and Hasan playing in the middle of the park.

Ankaragucu started the game very brightly as the passed the ball from back to front and worked hard to close the opposition down. There were a couple of half chances from Umut and Mehmet Erdem early on with neither troubling the goalkeeper.

It was Sivas who took the lead after 12 minutes and it was another dreadful piece of defending from Ankaragucu. They lost the ball in the middle of the park, the ball found its way to former Ankaragucu midfielder Omer Emir just inside the box who calmly put the ball past Gokhan in the Ankaragucu goal.

A very disappointing goal for Ankaragucu to lose with Gurkan, Volkan and Aytac all over the place. You could be mistaken for thinking it was the first time Volkan and Gurkan had played together and not most of their career.

Straight from kick off Sivas were through on goal again but for a poor miss they would have been 2-0 up. Again it was a mix up in the centre of the Ankaragucu defence.

Ankaragucu controlled the rest of the first half and had a couple of chances firstly through Aytac who blasted his shot which was well saved by the goalkeeper. Then Teoman from about 5 yards our just had to play it past the keeper but instead blasted well over.

There was time for one more chances for Ankaragucu, again the ball fell to Teoman but his effort was weak and he should have done better. Just when it looked like we would be heading in behind at half time Ankaragucu won a corner. From the resulting corner and a goalmouth scramble, the ball found its way to Umut Nayir and the big striker put the ball in the back of the net to make it 1-1.

Into the second half and it was all Ankaragucu. The problem though was that for all the possession we had, there weren't many clear cut chances. Our play at times was to safe and slow and only Mehmet Erdem looked like he could create something.

Levent Kale had a great chance at the end in front of open goal but somehow managed to miss which he so often has this season. He really looks a shadow of the player he was last season. The game stayed 1-1 and next up for Ankaragucu is a home match with Super Lig side Karabukspor on Monday.
By Nady - December 18, 2014