ANKARAGUCU AND THE GALLANT 10 MEN !

Ankaragucu maintained their unbeaten start to the season last night in Ankara with a hard fought win against Karagumruk. 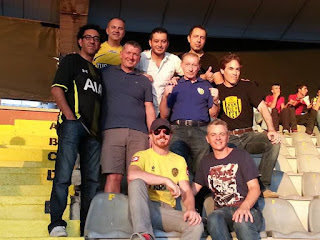 An excellent attendance as you would expect from the first home match of the season with Gecikondu full, Maraton almost full, Kapali half full and the away end with all of 30.

Lots of new faces wearing the Sari/Lacivert, but it was a confident start with a quote from Damon 10 minutes into the match .......... ‘they are playing less impulsively and more controlled footie’.   Agreed, and for the most part of the match they endeavoured to do this which is a big improvement from the past 2 season !    Also, it has to be said that Salih’s presence in midfield was crucial during the match.

4 minutes later, only 14 minutes into the match, and Ankaragucu was down to 10 men !    Mustafa made a high challenge on a Karagumruk defender and caught him in the head with his boot.   The referee decided red, however, I have to say that yellow was the correct decision.   Mustafa was going for the ball and not the man, and in hindsight should have headed the ball instead of raising his boot so high.    Unlucky decisions happen !

Ankaragucu could have folded at this point, but they kept their shape and continued to attack when possible.   It was end to end with Ankaragucu looking the more likely to score with Karagumruk’s attacks breaking down in the final quarter with some excellent Ankaragucu defending being a contributory factor.

Approaching half time with 36 minutes gone on the clock and a super goal from Ankaragucu.   A good fast move down the right with a cute flick to the overlapping attacker, almost to the goal line, the classic cut-back, and there was Orhan well positioned to slot in.

Into the 2nd half and 10 man Ankaragucu continued to look the better team.   Midfield General, Salih, was controlling the pace of the match and Mehmet Yilmaz was running his socks off up front and causing all sorts of problems for their defenders.

Halfway through the 2nd half and I was thinking that the word from the Coach was ............... ‘defend what we have’ !    However, perhaps I guess I was wrong when the match exploded into life again on the 67th minute.

Another great goal with a sweeping passing move from left to right with about 6 passes pulling Karagumruk’s defenders all over the place.   The cross came in and Sertan (who had just come on as a substitute) was on hand to head in to send us all into wild celebration.

15 minutes to go and last season’s star player, Hasan, joined the action to beef-up the midfield.

Mehmet Yilmaz was still hunting for a 3rd goal and had 2 good efforts thwarted when his half-volley went just past and another when a last minute tackle prevented his shot on goal.

Man of the Match, Salih, went off injured and we must hope that it’s not serious.   Also, a pat on the back to the other 9 players for their performance which bodes well for the remainder of the season.

5 minutes to go and time to perform the Mexican Wave around the Stadium.    Even the away supporters joined in !!! 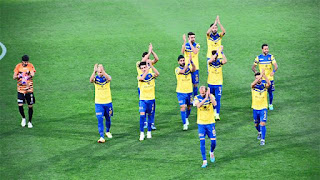 Next weekend is an ‘away match’ in Ankara when we will go to Kecioren.   Watch this space and emails for KO time and meeting details. 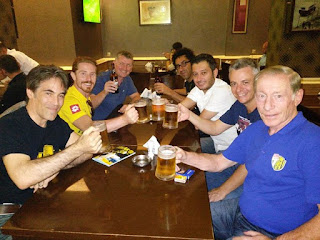