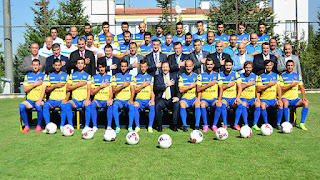 Ankaragucu return to league action on Sunday after the embarrassing midweek defeat against Payasspor in the Turkish Cup. As discussed on the Round Ball in Ankara Facebook page, the fact that we are out of the cup isn't an issue as it gives us the opportunity to concentrate on the League and promotion. However the manner of the defeat against a team sitting bottom of Lig 3 with 0 points and who lost 5-1 at the weekend is very disappointing.

The players who took to the field on Tuesday can expect a place on the bench or to be left out of the squad altogether. Jim mentioned that Hasan Ayaroglu was booed throughout the game, i would imagine that is more to do with him signing for our rivals Eskisehirspor than his performance, but this was an opportunity for him to fight his way into the starting line up which he has failed to do.

The opponents this weekend are Tepecikspor who after a poor start to the season, have now gathered some momentum with a fantastic 2-1 win over Samsunspor in the cup midweek, and also defeating Tarsus last weekend. They will have former Ankaragucu midfielder Veli Torun in their squad and will be coming to the Capital looking to take the 3 points back home to Istanbul.

Ankaragucu won 2-1 the last time the two sides met thanks to a last minute goal from Emir Ozbey. The team is a lot stronger since that match and the team need to take 3 points from this game especially with the points deduction still hanging over the club. Ferhat Odobasi who hasn't conceded a goal in over 900 minutes will be back in goal and looking to make it 10 clean sheets in a row since he signed for the club.

It looks likely the team will line up with the same starting 11 as last week. Mehmet Yildiz and Emrah Bozkurt will return to the attack and look to open their accounts for the season after Timur Kosovali and Teoman Erkan disappointed midweek.

Im predicting a narrow 1-0 win for Ankaragucu, the only thing that matters just now is the 3 points and keeping up the pressure on Manisaspor and the other teams at the top.
By Nady - September 24, 2015