ANKARAGUCU SHOW HOW NOT TO SCORE GOALS !!

Ankaragucu conjured up a performance yesterday on how to NOT score goals and in the final analysis were lucky to win a point.   Having the lion’s share of play is no guarantee of victory !!!

Ankaragucu went straight into attack from the whistle and had 5 goal attempts in the first 20 minutes.   Emrah, Sertan, Mehmet Yilmaz and Omer all had efforts saved, wide and blocked, and Tepecik only had one effort in the first half which was from a headed attempt.

However, Ankaragucu should have gone ahead in the 36th minute when a free kick was curled around the wall, but the ball hit the post and was cleared to safety.

My half time analysis was ............. ‘it’s all well and good to have 70% possession, but not putting the round leather thingie between the sticks is classed as failure’.    Also, Ankaragucu have gone back to their old habit of hoofing the ball out of defence in panic mode and therefore bypassing the midfield.   Too often high balls were lofted up to Mehmet Yilmaz who was well policed by the Tepecik defenders.

This is how it looks and feels to be frustrated !!!! 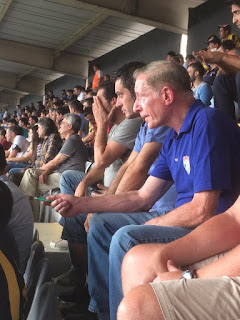 Into the 2nd half and with only 5 minutes gone Ankaragucu was embaarrassed by some nice footie from Tepecik who attacked in a fluid move down the left.   The cross came in and Ihsan and Mehmet Tasci got in each other’s way and the ball went in off Mehmet.   The blame has to lie with Ihsan – it’s HIS penalty area to make the call !!

Ankaragucu went back on the attack and dominated the match again and Mehmet Yilmaz should have equalised on the 55th minute.   He received the crossed ball near the penalty spot where he managed to escape from his marker, brought the ball under control, and fired over with the goal at his mercy.

One minute later and Ankaragucu found the equaliser and they have to thank the referee and linesman for spotting a Tepecik handball in the area.   Sertan took responsibility and fired in a textbook penalty with the goalkeeper helpless.

One minute later Emrah and the ineffective Harun were replaced by Mustafa and Timur.

It was still all Ankaragucu searching for the winner but their finishing was woeful.

Timur, Mehmet Yilmaz and Adem all had reasonable chances but their shots were either wide or weak.

The match fizzled out and the crowd took their frustrations out on the referee rather than the feeble attempts to score by the Ankaragucu strikers.

There will have to be a vast improvement in the weeks ahead if Ankaragucu is to retain 2nd spot in the League or even overhaul top team Manisa.

Back we went to The Red Lion Club to see Scotland and Ireland do the biz in their World Cup funny shaped ball games.