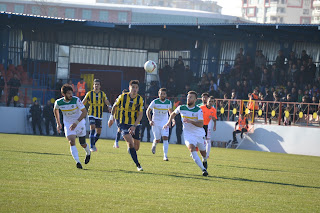 Ankaragucu were held to a 1-1 draw in Diyarbakir with Amedspor which now leaves them 6 points behind leaders Manisaspor who won 1-0 at home against Gumushanespor. The match was shown live on Ozgur Gun TV but unfortunately their internet channel crashed due to the sheer number of Ankaragucu fans who had tuned in. That in itself shows the gulf in size between these two clubs, unfortunately the quality on the pitch is about similar in standard.

Ferhat was replaced in goal with Turgut due to injury and Ankaragucu decided to stick with the same formation that saw them win 2-0 at home against Kocaeli Birlikspor. Myself and Damon managed to catch parts of the match due to a link through Periscope. We both agreed that the standard of football at this level is woeful and horrible to watch.

Ankaragucu struggled to put any passes together and the only players who showed any decent attacking quality were Hasan Ayaroglu when he came on as a sub and Omer Bozan. Its difficult to see this Ankaragucu becoming champions unless they go into the January break no more than 6 points behind Manisaspor and then make some quality additions to the team.

It was the home side who took the lead in the first half after the referee awarded a penalty due to a handball in the Ankaragucu box. Former Genclerbirligi striker Deniz Naki stepped up and scored to make it 1-0 Amedspor.

The score remained that way until mid way into the second half, Hasan Ayaroglu delivered a nice cross into the box from a free kick, Volkan Geyik headed the ball back across goal and Timur Kosovali was on hand to head the ball past Serkan in the Amedspor goal to make it 1-1.

Neither side created any chances for the remainder of the match and neither could argue about the 1-1 draw. Its now 1 win from their last 5 games for Ankaragucu with 1 game remaining until the winter break.

That match is against on form Tuzlaspor next Sunday at home while Manisaspor travel to Sivas in a huge weekend for both clubs. The match preview will be here on the blog midweek.
By Nady - December 13, 2015