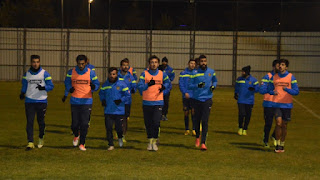 Ankaragucu are away tomorrow against Amedspor in the hostile city of Diyarbakir in what will be another tough match. The good news is that the match will be played live on Ozgur Gun TV meaning we can all cheer the team on and finally see an away game, for me it will be the first time i have seen the team play a full game this season on TV.

The team will go into the match full of confidence after a good 2-0 win last weekend against Kocaeli Birlikspor. However as we have seen all to often with Ankaragucu over the years, nothing is a given and the team will need to raise the performance levels even higher to bring the 3 points back to Ankara.

Emrah Bozkurt has hit a bit of form of late and showed that he can be a big player for the team this season. Not only is his experience invaluable to the younger players, but his work rate and technique are two areas that will play a big part in the teams season. He has scored 2 goal of the season contenders in the last couple of weeks and long may it continue.

Harun Aydin will miss out due to suspension and it looks like Muhammed Gonulacar and Salih Sefercik will continue their pairing in the middle of the park after last weeks success. Timur Kosovali will be hoping he can find the back of the net as he looks to hit the goal trail after a disappointing start.

Make sure you tune into Ozgur Gun TV at 1pm Turkish time for the full match live!
By Nady - December 11, 2015