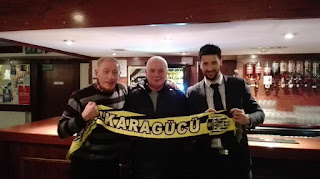 Firstly, the Ankaragucu Scottish contingent met in Glasgow this week with myself, Jim and his cousin having a good catch up and talking all things Ankaragucu and Rangers. Jim has pledged his loyalty to the blue half of Glasgow and removed all Green and Grey clothing that was off limits.

Ankaragucu closed out last nights transfer deadline with 4 players leaving and unfortunately none arriving. The club had agreed to sign Kayserispor youngster Mert Ozyildrim on loan until the rest of the season but failed to complete the move due to payments that are owed to Sedat Bayrak.

Sedat was released from the club last season and is owed just over 200,000 Lira despite having only played 9 games. The club tried but failed to come to a compensation package with the defender demanding the whole amount.

The club agreed to mutual terminations of contract for Murat Yilmaz who has signed for Amedspor, Emrah Tuncel who signed for Manisaspor. Both Onur Bayramoglu and Mustafa Ozturk completed moves to Pendikspor.

Its concerning that 3 of those players who were signed in the summer have been released already due to failing to break into the team.
By Nady - February 01, 2017