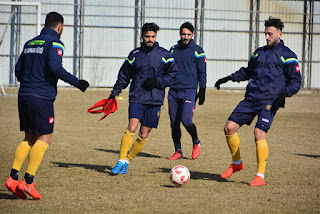 Ankargucu have a chance to move top of the league this weekend with a win over Inegolspor at home. A big crowd is expected to gather at the 19 Mayis Stadium after the teams impressive win at Karsiyaka last weekend.

Gumushanespor are in Cup action this weekend as they take on Akhisar BB which means Ankargucu will have played 1 more game. This makes our match a must win game as a defeat or draw would see Gumush top with a game in hand. A win would put the pressure back onto Gumushanespor with it all to play for.

We expect the team to be much the same as last weekend and the performance levels to be matched as well. Karsiyaka is a tough place to go, but Ankaragucu put in a performance of a Championship winning team. They were solid at the back and created chances at the other end. This type of performance has been missing since the return from the winter break.

Kenan Ozer and Korcan Celikay made their debuts last week and are expected to feature again this weekend. There was much anger when Onur Atasayer left the club for 900K to Bursaspor. However that deal now looks a good piece of business from the Ankaragucu management. Onur was out of contract at the end of the season so could have left for nothing. It also allowed us to bring in new signings including Emre Kara who has filled in at left back nicely.

The Kanka group will again be in attendance so for anyone who wants to join them please get in touch with Jim for details.
By Nady - February 03, 2017