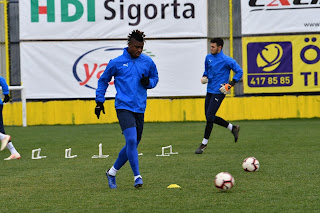 Bayram Bektas will take control of his first match as Ankaragucu manager against the team who sacked him 2 weeks ago. The former Goztepe boss will be looking to put one over his former side and give Ankaragucu a much needed boost going into the winter break.

Yet again Ankaragucu will have to play a home match 4 hours outside of Ankara as the match will be played at the Kadir Has in Kayseri. The way Ankaragucu have been treated by the Municipal over the years should never be forgotten. The Yenikent pitch again isn't fit for purpose which is the responsibility of the Municipal. Its embarrassing for them, and also Turkish Football that they cant even keep a football pitch in half decent condition.

Mehmet Yiginer spoke to the media yesterday and stated that when he held discussions with Bayram Bektas he addressed the concerns of Ankaragucu being bottom of the league in terms of distance covered per game, goals scored and the amount of injuries the team has had. He also said that the club will look to bring in 3-4 new players in the January transfer window.

The first thing that Bektas will need to address as he takes over, is shoring up the defence again and making Ankaragucu difficult to beat. Alihan, Kone and Thomas have all under performed when on the pitch. Some of the goals we have given away is what you would expect to see at junior level.

Its no coincidence that since Djedje has moved from midfield to right back, the team hasnt looked the same. Obviously this is due Erdem being out injured. Djedje needs to be moved back into the middle of the park with Faty, and someone else can play at right back while Erdem is out.

Kubilay is also not giving enough with only 1 goal since his loan move from Bursaspor. We need to create more chances for him, but he also needs to offer more. There is also an opportunity for Cerci to step up and play. There is no doubting that he is the most talented player in the team and we need him if we are going to survive this relegation fight. The same can be said for Mokhtar, both talented players but we havent seen enough for them. Can Bayram Bektas be the one who brings the best out in both players?

Goztepe are on a similar run to Ankaragucu and lie one place blow in the league and one point behind. They have only scored 1 goal in their last 5 Super Lig games and haven't won a game in that spell. Like Ankaragucu, they have also had some excellent results this season beating Fenerbahce, Besiktas, Trabzonspor and Konyaspor. They seem to save their best performances for the big games, and struggle against the teams at the lower end of the table.

The game is set up nicely for Saturday, two rival clubs both stepped in history and tradition with a fantastic loyal fans base. Two clubs fighting against relegation, and Bayram Bektas facing the team who sacked him. Lets hop its Ankaragucu fans who are celebrating at the end of the game!
By Nady - December 20, 2018