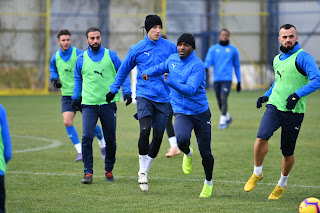 The last couple of league games for Ankaragucu have been against two of the leagues best sides in Basaksehir and Besiktas. Unfortunately both teams were to strong for Ankaragucu and the team from the Turkish Capital came away with 0 points. With injuries and suspensions mounting up for Ankaragucu they faced almost impossible tasks of taking anything from those games.

This Saturday afternoon however, is a huge game as its against another side who are on form but a team that Ankaragucu are certainly capable of beating. Sivasspor are the hosts in what will be a cold December afternoon. 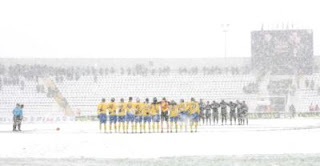 One of the darkest moments in Ankaragucu history was in January 2012, the season the club were relegated to PTT Lig. The Ankaragucu team travellend to Sivas in the snow, players hadnt been paid wages and the fans had to buy water and food for the players. The team lost 3-0 but the fans respected the players for giving everything in the most difficult of times.

Fortunately things are looking more positive for Ankaragucu, although still facing financial problems, the team has enough quality to come back to Ankara with a positive result.

Sivasspor are on a run of 5 games without a defeat which include fantastic wins over Basaksehir and Besiktas. Another win last weekend against Goztepe saw Sivas move 1 point ahead of Ankaragucu in the League table.

Sivas are an experienced side and their key player is the former Real Madrid and AC Milan playmaker Robinho. The former Brazilian International is in Turkey under contraversial circumstances. He was sentenced to jail for 10 years after an Italian court found him guilty of rape. At the time of the sentencing Robinho was in Brazil and under Brazilian law Brazilian nationals cant be extradited by foreign countries. Therefor the only way he will serve his punishment is if he voluntarily goes back to Italy. Disgraceful that any club would sign this type of person, and he finds himself playing for Sivas.

Muhammet Demir and Arouna Kone are also dangerous players in attack for Sivas and although not prolific they are still capable of hurting teams as was the case against Basaksehir and Besiktas.

Ankaragucu will be hoping that Thievy Bifouma will return against his former club and El Kabir who both trained this week with the rest of the squad. Bifouma, El Kabir and Erdem have all been missed badly by Ankaragucu and Ismail Kartal will be hoping he can call on them at the weekend.

Ankaragucu havent won in their last 5 competitive games and will be hoping they can turn that around this weekend. One player who has impressed during this barn spell for Ankaragucu is 20 year old Goalkeeper Altay Bayindir. Two man of the match performances in the last couple of games has saw him win the plaudits of the Ankaragucu fans, media and even other Turkish football fans. He will be called upon again at the weekend and if he keeps performing at this level he could be the next Ankaragucu academy that gains the interest of other Turkish Clubs.

Jim will have all the usual details of where the Kanka group will be watching the game on Saturday and i will have the match report up after the game.
By Nady - December 13, 2018